I was recently able to sit down with Dr. Luise von Flotow, a professor in the University of Ottawa’s School of Translation and Interpretation, to discuss They Divided The Sky her excellent English language translation of GDR author Christa Wolf’s 1963 novel Der geteilte Himmel. Our chat is now online through Radio GDR, the English-language podcast dedicated to all things East German and you can find it here: https://radiogdr.com/they-divided-the-sky-christa-wolf-episode-12/

Wolf’s novel is great place for those looking to get a sense of everyday life in the GDR during the “Construction Years” of the late 1950s and early 1960s and Dr. von Flotow was able to share some interesting insight into the work, its translation history and why it remains a vital piece of GDR culture. 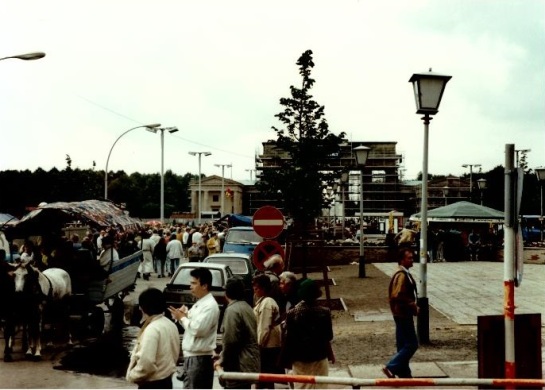 Not long after the fall of the Berlin Wall, tours of the East Bloc, which only months earlier had very limited mass appeal, were suddenly in great demand as visitors from the western world descended to explore the treasures of a culturally rich part of the world which had previously been out of reach. Two of these were Mary and Ann Ford, nurses from Ontario, Canada and avid travelers during their vacations. The photos in this post are taken from trip they took to Central Europe in June of 1990 and I enjoy them for how they present a Berlin (mainly) that is both familiar and distant. END_OF_DOCUMENT_TOKEN_TO_BE_REPLACED

To mark the 57th anniversary of the building of the Berlin Wall, here are some memories of Gundula Wilhelm, a retired pastor’s wife from Alberta, Canada. Gundula and her family moved to East Berlin in 1952 so that her father, a Lutheran pastor, could serve the zum Vaterhaus parish on Treptow’s Baumschulenweg, just a short stroll to the border dividing the two halves of the city.

Berlin August 13, a publication of Federal Republic of Germany’s Ministry for All-German Affairs, here in a revised and expanded version in April 1965 (author’s collection)

“It was wonderful growing up in the Berlin of that time. When we arrived in the city, the border was still open of course, so you could go over on the S-Bahn [commuter train, ed] any time you wished,” remembers Gundula.  “You might be unlucky and get searched, but that never happened to me. We had close relatives over there though, so we were over often. In fact, we were in the West visiting a cousin on August 12, 1961, but came back to the ‘lovely’ East that evening. We woke up the next morning to the sound of tanks passing by our house on their way to the border just up the road. And from that point on, you couldn’t go across, simple as that.” (Interview with author, May 27, 2018)

While we are familiar with these sad stories of the immediate consequences of the Wall’s construction, it was the account of the years that followed shared by Gundula and her husband Friedmut which I found most fascinating as they help bring to life the atmosphere that the couple and their circle of young friends experienced in the aftermath of the Wall.

END_OF_DOCUMENT_TOKEN_TO_BE_REPLACED

When asked to characterize his approach to dealing with Communist authorities, Friedmut Wilhelm, a retired Lutheran pastor who largely grew up in the German Democratic Republic and served parishes there from 1966 to 1979, is matter of fact: “We simply refused to play the game by their rules.” (Interview between author and Friedmut Wilhelm, September 5, 2017).

It’s a telling remark and one that I would contend is the key to understanding how the Lutheran Church in the GDR persisted in the face of forty plus years of hostile rule by the Socialist Unity Party (SED). This post is based on three interviews I conducted with Friedmut Wilhelm and his wife Gundula over the past number of months and it relates experiences they had as a clergy couple in rural East Germany between 1966 and 1979. While the Wilhelms’ story is theirs alone, I suggest that it is an example of the church’s – or more accurately, some of its clergy’s – dogged determination  to maintain independence from direct state control, an attitude which allowed the Lutheran Church to help facilitate the peaceful revolution of 1989 which brought an end to both the GDR’s state socialism and the Cold War. END_OF_DOCUMENT_TOKEN_TO_BE_REPLACED

My father, John Kleiner, at a masquerade ball on board the Homeric, the ship which transported him to Europe in the fall of 1959.

Today would’ve marked the 82nd birthday of my father, Dr. John Kleiner, a professor of at the Lutheran Theological Seminary in Saskatoon, Canada, and the man whom I have to thank for my interest in German history. To mark this date, I thought that I’d share some photos and notes from a trip he took to Berlin in the winter of 1960. I think that these provide an interesting perspective on the divided city before the Wall and I hope that after reading this post that you’ll agree with this assessment.

END_OF_DOCUMENT_TOKEN_TO_BE_REPLACED

I happened to be studying German in West Berlin at the time of this incident and I remember it as a moment which underscored for me just how cold the Cold War had left many West Berliners. END_OF_DOCUMENT_TOKEN_TO_BE_REPLACED

As the fall of 1989 progressed and the Socialist Unity Party’s (SED) grip on power began to loosen, many of the Party’s more than 2 million members watched in disbelief as the socialist project crumbled before them. One window onto the myriad of reactions that these developments gave rise to is found in the newspapers under SED direct control. Junge Welt (Young World) was the organ of the GDR’s youth organization, the Free German Youth (FDJ), and with 1.4 million copies printed, it was the country’s largest circulation daily. My collection includes this paper’s November 7, 1989 edition, and it provides an amazing reflection of the disintegration of state socialism in the GDR just before the fall of the Berlin Wall.
END_OF_DOCUMENT_TOKEN_TO_BE_REPLACED

On August 13, 1961, 55 years today, East Germany erected the Berlin Wall. At least 138 individuals died at the Wall during its more than 28 years of existence, most of them East Germans seeking to flee “real existing socialism”. Approximately half of these deaths occurred in the first five years after the Wall’s construction in the period before the GDR was able to refine the fortifications to a point where escape became virtually impossible.

While the construction of the Wall turned the flood of East German citizens fleeing West via Berlin to a trickle, in the early years of the barrier, many desperate individuals tried to escape from East to West across what was in places still a semi-porous border. At times these escape attempts escalated into open confrontations between East German border guards and West Berlin police, sometimes accompanied by an exchange of gunfire. One result of this was that the atmosphere in the newly divided city was highly charged. This was most certainly the case on Sunday, May 27, 1962.

Checkpoint Charlie as photographed from the West Berlin side, February 1962 (photo: G. Hynna)

“End of the French Sector” – Bernauer and Swinemünder Strassen. Note how the windows in the buildings on the eastern side have been bricked up to prevent escapes (photo: G. Hynna). END_OF_DOCUMENT_TOKEN_TO_BE_REPLACED

Last year I used the 24th anniversary of the fall of the Berlin Wall to tell my personal “Wall fall” story. There are many that are more exciting, but few that provide that all important “view from Saskatchewan” perspective.

Pseudo-panorama of the death strip at Potsdamer Platz. Graffiti in underlined in black reads “Germany is more than the Federal Republic of Germany” (photo: author).

This year I’d like to share my memories of my first encounter with the Wall in the spring of 1985 and reflect on the reality that this structure imposed on the divided Berlin for the 28 years of its existence. END_OF_DOCUMENT_TOKEN_TO_BE_REPLACED

This post completes a series of entries on the life of Dr. Johanna Goldberg, a physician from the eastern German city of Schwedt. It is based on an autobiography written by Dr. Goldberg (Vom Prügelkind zur Ärztin/From Whipping Boy to Doctor) and a number of email exchanges I’ve had with her over the past year. I’ve chosen to present this biography in considerable detail as it illustrates a number of aspects of East German life very well.

For the first part of her biography, click here. You’ll find the second part here.

When last heard from Johanna, she had just graduated from medical school at Jena’s Friedrich Schiller University . . .

After her husband’s academic plans were derailed by his recurring TB, he decided to complete an apprenticeship program as a caregiver at a clinic in Bad Berka which specialized in treating severe TB cases. In order to be with her husband, Johanna decided to apply to complete training as a lung specialist at this same clinic. Once accepted here, Goldberg quickly distinguished herself and was invited by the Senior Doctor to complete a PhD qualification under his supervision. During the nine years the couple spent in Bad Berka, Goldberg completed both her specialists’ training and her PhD studies. And were that not enough, she also managed to bring into the world the couple’s first child, a son.