The GDR’s leaders were very sensitive about how their country was perceived internationally. Seen by many as a rump state and proxy of the Soviet Union, East German leaders took great pains to assert their legitimacy whenever and however they could. These efforts increased in 1971 with the ascension of Erich Honecker to the positions of First Secretary of the Central Committee of the Socialist Unity Party (SED) and Chair of State Council. Under Honecker, East Germany pursued international recognition through a variety of means including diplomacy (e.g. supplying aid to Third World countries, applying for and receiving member status at the United Nations (1973), signing the Conference on Security and Co-operation in Europe at Helsinki (1975)) and sport (by pouring huge amounts of money (and anabolic steroids) into the country’s Olympic programs to support the country’s “diplomats in training suits”). Another way the GDR attempted to massage its international image was by hosting the 10th iteration of the World Festival of Youth and Students in East Berlin in the summer of 1973, an event that has come to be known by some as the “Red Woodstock”. 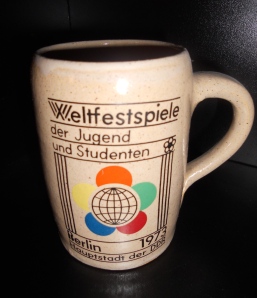 Commemorative beer stein given to a family which hosted a billet in their apartment on Berlin’s Leninplatz during the festival.

END_OF_DOCUMENT_TOKEN_TO_BE_REPLACED

This week I want to begin shining a light on the militarization of East German society, a subject that I’ll return to from time to time in the coming weeks. Here I want to present a couple of items in my collection which are related to the Combat Groups of the Working Class (Kampfgruppen der Arbeiterklasse (KdA)), a volunteer, paramilitary organization formally under the control of the GDR’s Interior MInistry (and which contained the notorious State Security Service (Stasi). The Combat Groups were made up largely of male members of the ruling Socialist Unity Party (SED) who were organized into units at their workplaces (factories, state offices, collective farms, etc. but not, interestingly, educational institutions). Like army reservists, Members of the Combat Groups of the Working Class (to use the official GDR jargon or Kaderwelsch) met after work or on weekends several times a year for uniformed combat training and exercises. I think my interest here stems from the contrast between how military preparedness seeped into so many aspects of East German life and the way in which this contrasts with my own lived experience in Canada.

“Die Internationale” as sung by members of the Combat Groups during the 1986 iteration of Groups’ annual parade in East Berlin (on the Karl-Marx Allee!)

END_OF_DOCUMENT_TOKEN_TO_BE_REPLACED

This cap was worn by an Abschnitsbevollmächtigter (ABV) or Community Police Officer in the 1980s. ABVs were members of the People’s Police (Volkspolizei) and assigned responsibility for a particular area of a city or town. In addition to walking the beat, carrying out traffic controls and general law enforcement, ABVs were also expected to carry out more unpopular duties such as keeping an open ear for Western television or radio broadcasts and working with volunteer helpers to ensure that “House Books” were kept up to date. These books registered all overnight visitors to a residence and served as an effective means of keeping tabs on residents and those who visited them.