One of the GDR’s most popular magazines was the weekly Neue Berliner Illustrierte (New Berlin Illustrated), a bright and colourful publication which, with its mixture of politics, portraits, social trends, sport and culture, resembled nothing so much as that iconic chronicler of American society and politics LIFE.

Issue #35 of the NBI in 1969, the 20th anniversary of the GDR. The cover story focused on the construction of the “new, socialist Berlin” (photo: R. Newson).

NBI was older than the GDR itself, first appearing already in 1945 during the early months of the Soviet occupation. Over the years, the magazine enjoyed considerable popularity and by the end phase of the Workers and Peasants’ state, NBI had a weekly circulation of 800,000 issues. While such numbers are perhaps not the most reliable measure of popularity in a command economy (well, beyond a publication’s popularity with those in charge), the NBI “was sought after just like all other bright and glossy magazines in which there was less propaganda” (“Amboss oder Hammer sein” by Christoph Dieckmann, ZEIT, November 1, 1991).

Though NBI may have offered less propaganda than other GDR periodicals, scanning the some thirty issues that I have quickly underscores the fact that all things are relative. Indeed, just like the American LIFE, the NBI was unmistakably a champion of the social and political system which created it. NBI covers featured state socialist icons (e.g. Marx, Andropov, Honecker) or events (e.g. anniversary of Red October), but more often than not the focus fell on “average” GDR citizens presented as examples of successful “socialist personalities”. The pages of NBI were filled with such popular socialist tropes as the tireless construction worker conscientiously labouring to help the Party meet its pledge to “solve the GDR’s housing shortage”, the working mother balancing a position of professional responsibility with a happy home life or the young person choosing a career that would strengthen the socialist future. My personal favourite from these? The 1982 cover story on collective farmer Alfred Lenz, the GDR’s “Potato King”. A taste of this (tater?) gem: “1979 was an out-and-out potato year. Everything went as it should in regards to both the quality of our work and the weather.” (pg. 12, NBI 19 82). 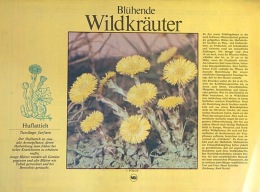 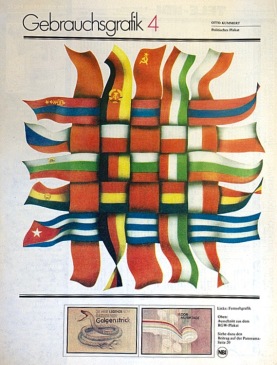 But there is no denying that the NBI managed to produce a mix, a bit of something for everyone. Aside from the open political agitation, regular features included a puzzles and games page (Crossword clues: “Founding father of Soviet Uzbek literature”, “Job norm (abbr.)”), TV listings, a cartoon page as well as monthly columns on health, law and flora and fauna. Some issues featured a full colour poster (e.g. GDR rock sensation Karat, seeabove) while back covers were often dedicated to a thematic-series that would run over months and which were suitable to cut out for display. The issues I have include series dedicated such diverse subjects as capitals of Soviet Republics, Meissen porcelain and wild herbs.

Of particular interest to me are my collection’s four issues of NBI from the turbulent fall of 1989 when the GDR was in the process of imploding. Only twelve weeks separate issues 35 and 47, but over that time the NBI goes through three editors-in-chief, shedding its role as PR flak for East Germany’s “real existing socialism” and taking halting steps towards acting as an actual journalistic enterprise. 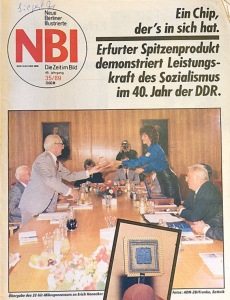 Flipping through the pages of the August 28th issue, you would never know that the GDR was in full ferment. Tens of thousands of East Germans had used their summer vacations to flee to Hungary where they sat waiting for that country’s leaders to make good on their promise to open the border with Austria. Thousands more sat in the West German embassies in Warsaw and Prague. At NBI, meanwhile, it’s business as usual with a cover story on the production of the East Bloc’s first 32-bit microchip by the People’s Own Microelectronics Combine “Karl Marx” in Erfurt.

The GDR’s leader Erich Honecker had personally championed the development of an East German microelectronics industry and overseen the investment of more than 30 billion Marks on this project. For the aging leader, the creation of a socialist microelectronics industry was both an ideological and economic imperative. Ideologically, an East German microchip would both demonstrate the strength of the socialist economic system and render useless the West’s strict embargo on the export of such items to the East Bloc. On the economic sides of things, Honecker was convinced that the chip would reinvigorate the moribund East German economy by increasing productivity and efficiency. NBI’s reporting of the story hewed carefully to the Party line, trumpeting the achievement, however, it leaves out any mention of the fact that the cost of producing one chip ran at 500 Mark per, or 100 times what the same item cost in the West.

At first glance the October 16th issue, dedicated in large part to the celebrations of the GDR’s 40th anniversary the week before, appears relatively normal. While Honecker stands beside Mikhail Gorbachev on the cover, the NBI’s reporting is careful never to quote or refer to him. While these would have been unthinkable snubs in previous times, they were fully in keeping with prevailing attitudes in the Party leadership circles at the time which saw Gorbachev’s perestroika project as a threat to SED control. In the absence of the usual hymns to the Soviet Union, the NBI simply puts even more emphasis on East German self sufficiency. and the achievements of the socialist state.

However, there are indications of the upheavals wracking the GDR in this issue. For example, an essay in praise of the country as part of the anniversary coverage by the Chair of the GDR Journalists’ Association on the occasion of the 40th anniversary directly refers to the challenge to SED power: “These celebrations, no matter what form they took, served to acknowledge that together we have created the socialist state. They show that this cooperative effort is important and valuable, and demonstrate we will let nothing and no one – especially not those who gather around the western media (a reference to how protest organizers in Leipzig had used connections to western media to ensure that images of the Monday demonstrations reached western TV and radio, ed.) – disrupt our shared work.”

More proof of turbulence at NBI is found in the masthead where, after 22 years, a new , much younger (43) man sits in the Editor-in-Chief’s chair. This change was part of a power struggle taking place within the Party in those days which saw the generation of 40 and 50 year olds apparatchiks use the popular protests as justification to push aside the septua- and octogenarians who had clung so stubbornly to power for the entire existence of the GDR. As the contents of the magazine suggest, the new boss was no less a Party loyalist, and in this personnel change, we see a foreshadowing of that which would come to the top of the Party structure later that week when Erich Honecker would be deposed for Egon Krenz, a lifelong Party functionary and long held by observers to be the SED’s “crown prince”. 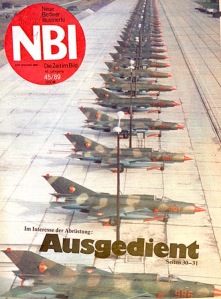 In the interim between these issues, SED rule was essentially in full dissolve mode. Having lost control of the situation in the GDR, the Party flailed about with moves it hoped would help stabilize things. Egon Krenz had been installed and attempted to get in front of the “reform” parade, however, he was seen by virtually all East Germans as being “Honecker’s man” and had no credibility in the role of reformer. The downward spiral continued.

At NBI, the ferment of East German society was finally getting reflected on the magazine’s page where much suggests that the editorial staff was trying to carefully navigate the changing political terrain. As evidence, see the first words printed in the new issue, a short editorial from staff which acknowledges that “a destructive media policy had destroyed trust” and which commits the NBI to “no longer allowing the whitewashing of the facts, silence and lack of criticism.”  Lest one think that the dissidents had gained control of the editor’s suite, however, the same editorial promises that staff’s future actions will  be guided the values of the GDR constitution (the same one that guaranteed the “leading role of the SED” – ed.).

But despite these carefully veiled pledges of loyalty, this issue does give some sense of the changes taking place in GDR society. For example, the magazine acknowledges the key role the Lutheran church was playing in events by featuring an interview with the pastor of the Marienkirche, a congregation which met in a building at the foot of the East Berlin TV tower. Entitled “First the courage to speak the truth”, the interview sees the pastor outline what he considers the prerequisites for dialogue in the country and support calls for a “democratic, just and socialist GDR”. While this may sound like a provocative position, with its implication that East Germany was none of those, in reality it dovetailed nicely with how the SED was trying to place itself at the front of a movement to “reform” the Workers and Peasants state. 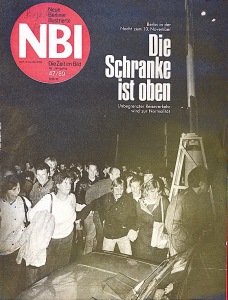 The November 20th issue hit newstands on November 16th, one week after the opening of the Berlin Wall. With a cover image of East Berliners making use of their new found freedom to cross over into West Berlin, this issue sees NBI finally catching up to events. Again, there’s a new editor-in-chief, a changing of the guard that once again reflected the moves at the top of the Party food chain where Egon Krenz was in the process of being pushed aside as the SED’s claim to monopoly power evaporated.

Inside the NBI, reports on the momentous day are front and centre sit side by side with an editorial endorsing the recently announced “Action Plan” put forth by the SED (old habits die hard, I suppose) as the basis for a proposed coalition government. Another article of note is on how soldiers from the National People’s Army and government offices have been called into action to help ensure that the delivery of goods does not collapse completely. This measure had to be taken to compensate for the absence of the tens of thousands of workers who had fled via Hungary and Czechoslovakia over the summer. This view onto the consequences of the mass exodus had been absent from GDR media up to that point and was not particularly present in reporting in the West, so I found it interesting to see this glimpse into the reality of everyday life at the time of great social upheaval.

The NBI would limp along until early 1991 and next week’s post will look at what became of the magazine after unification.