In the twenty five years that have passed since the fall of the Berlin Wall and the reunification of the two German states, little of what might reasonably be labeled “East German” has survived to find its place as part of joint German culture. There’s the distinctive and almost-Disneyesque Ampelmännchen found on pedestrian signals in the former-East, a whimsical and certainly far less business-like figure than its striding western counterpart. Beyond that, however, I am able to think of only one other example of a GDR product that has managed to rise above its “socialist taint” to assume place in the collective culture and that would be the Berlin television tower.

Built in over four years beginning in 1965 and opened on October 3, 1969 as part of the GDR’s 20th anniversary celebrations, the tower was intended to demonstrate the socialist system’s technical abilities and serve as a symbol of a new era which pushed aside the legacies of ‘feudal’ and ‘bourgeoise’ power. Given this, that the tower became a standard part of East German iconography comes as no surprise. Indeed, the TV tower or its image was consistently referenced in GDR design as the gallery of objects from my collection below attests to: 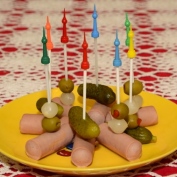 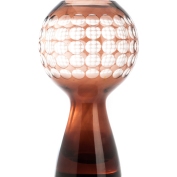 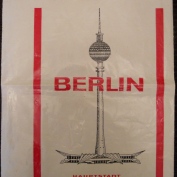 The cover of the October 1979 issue of Das Magazin, the a much loved (and hard to come by) monthly covering the arts (photo: author).

A commemorative scarf featuring the TV tower produced in October 1969 by the Ministry for State Security’s elite Feliks Dzerzhinsky Guard Regiment to mark the 20th anniversary of both the GDR, the Ministry as well as Lenin’s 100th birthday (photo: Jo Zarth).

The idea of including a TV tower in the reconstruction of the central part of East Berlin can be traced back to a 1958 architectural competition. Here a collective led by Hermann Henselmann, the country’s leading architect and a veteran of the Stalinallee project, proposed what he called a Turm der Signale or Signal Tower on a space adjacent to Berlin’s city hall, the Rotes Rathaus. At the time, however, the idea was soundly rejected with many Party leaders feeling that a more overtly ideological symbol (such as a large Lenin statue) should provide the focal point to the Republic’s central district. By the mid-1960s, however, “technological modernity had become the East’s accepted architectural language” and a TV tower was approved as part of the project. (Philip Ladd, The Ghosts of Berlin: Confronting German History in the Urban Landscape. University of Chicago Press (1997), pg. 188.)

During the years of the tower’s construction, East German media went to great lengths to report on the creation of this  ideologically-laden symbol. In this reporting, the writers made a clear effort to evince a fondness for the structure among the GDR populace by giving the structure the nickname “The Giant at Alex”, a reference to the structure’s location adjacent to the East German capital’s central square, Alexanderplatz. These transparent attempts were soundly mocked in the West Berlin media with tabloids there sometimes referring to the tower as “The One-legged Giant”.

Shortly after the building’s dedication, however, another more popular designation for the tower did emerge: Telespargel which translates as “Telesparagus”. Though often cited as a product of “the people’s voice” (“Volksmund”), the term appears to have been the work of the East Berlin daily the Berliner Zeitung, but regardless of its origins it quickly became popular in publications on both sides of the Wall. (see: Die Namen des Berliner Ferhsehturms by Ulrich Diblelius, accessed on Dec. 16, 2014 at http://opus.kobv.de/zlb/volltexte/2012/13210/pdf/tvtower.pdf). Authorities’ rather transparent efforts to give the tower a patina of “folksiness” were even mocked by the GDR’s satire magazine, Eulenspiegel, shortly after the structure’s opening: “As has likely escaped no one’s attention, Berlin’s skyline is now dominated by a new structure, the Telespargel, also popularly known as the television tower.”

The ball of the tower as seen from the steps of the Altes Museum (photo: author).

The tower in 2006 festooned in the corporate pink of Deutsche Telekomm on the occasion of the World Cup (photo: author).

A view of the tower and the former-Palace of the Republic taken, appropriately enough, from Niederlagestrasse or Defeat Street (photo: author).

The tower with Berlin’s “Red City Hall” in the foreground (photo: author).

The view of East Berlin’s Alexanderplatz and the Karl-Marx-Allee taken from the tower just prior to its opening in 1969. Photo from Neue Berliner Illustrierte, the GDR’s version of Life magazine.

A more serious challenge to authorities’ desires to use the tower in the “class struggle” came from an unexpected effect that is produced when direct sunlight hits the metal skin that covered the structure’s spherical working area. For when hit by sunlight at a certain angle, the skin’s individual stainless steel panels produced an unmistakeable cross that spanned an entire side of the tower. This phenomenon was not greeted by GDR authorities but provoked more than a few smirks from their opponents and an important part of the tower’s Cold War-era lore. In fact, when visiting Berlin in the 80s, I had more than one West Berliner enthusiastically try to explain to me what became known as “The Pope’s Revenge”.

View From the Top

Not surprisingly, the tower became a popular attraction for visitors to the East German capital, however, on my visits to the divided city I never ventured up. I would imagine that the unhindered view of the city that continued behind the Wall would’ve made a visit to the tower a poignant one for many East Germans. I finally made it up the tower in 1996 and remember being struck by how one could still, in spots, detect signs of where the Wall had run between the two halves of the city.

Westward view from the TV Tower as seen in 1996. The white building was the GDR’s International Trade Centre and to its right is the Friedrichstrasse S-Bahn and train station (photo: author).

The view north from the tower in 1996 includes the newly renovated golden dome of the synagogue in Oranienburgerstrasse (at left) (photo: author).

The TV Tower as the Symbol of the New Berlin

While much of GDR-era East Berlin has been dramatically altered (e.g. Alexanderplatz) or even removed (e.g. Palace of the Republic), the TV tower’s has found a place not only in the Berlin cityscape but become a beloved icon of the “new Berlin”. This status was not inevitable and American historian Phillip Ladd notes that as “one of the best known symbols of East Berlin, there were inevitably demands to tear it down after reunification.” (Ladd, pg. 188.). Thankfully, these calls went unheeded. I would imagine that the tower owes its continued existence to a combination of factors including its economic viability as both a tourist site and broadcast/ telecommunications tower as well as the simple fact that the cost and logistics of removing the structure would be, to put it mildly, considerable. Whatever the reason(s), the tower appears to have established itself as the preeminent symbol of the new, hip Berlin. Who’d’ve thunk?