I’m going to start this post marking the 52nd anniversary of the construction of the Berlin Wall on August 13, 1961 (what do you get a Wall that has ceased to exist?!) by referring to Lloyd Cole, one of my favourite signers.  The lead single off his latest record (the very fine Standards) is a tune called ‘Period Piece’ which is written from the point of view of the Berlin Wall. In it Cole sings, “It was my austere demeanour defined the age”. Anyone who experienced the Wall while in Berlin will know that Lloyd is not exaggerating: the Wall served to make manifest the tensions of the Cold War in way that nothing else ever did. Something for which we can be grateful.

For those of you in need of a tutorial on this event, a clip below from the Discovery Channel gives a decent overview of the Wall’s construction, even if it does, bizarrely, date the event as August 20th?!

Perhaps it’s the Wall’s era-defining quality that explains my motivation for spending part of my recent western Canadian vacation tracking down one of its many pieces which have been strewn around the globe in the past 20+ years. A while back during a visit to Winnipeg, I heard a story that a chunk of the Berlin Wall had made its way to the city thanks to a resident of German heritage. Apparently the plan was to donate this to the University of Manitoba for display on campus as a monument to the Cold War. The university didn’t bite at the offer, however, and so I was left to wonder whether the story was true and, if so, what had become of the relic.

In preparing for this summer’s trip to Winnipeg, I did a bit of digging around and made contact with a retired businessman who confirmed that a prominent local developer named Martin Bergen had indeed imported a section of Wall with an eye to having it displayed on campus. When the university rejected his offer, I was told, the piece went into storage where it remained until 2001 when Bergen donated it to an open air museum, the Mennonite Heritage Village in Steinbach, a community about an hour to the east of the Winnipeg.

When I heard this, I remembered thinking that this was more than a bit odd. What sense did it make to display a bit of Cold War history in a museum dedicated to the life of Mennonite pioneers in the late 19th and early 20th Canadian prairie? I decided I should find out and, after ‘bribing’ my uncle with 10 lbs of peameal bacon for a ride from Winnipeg, out we set. Upon arrival at the museum, we found a few cars in the lot and a pleasant elderly woman at the reception. She greeted us and asked if we were here for a tour. I answered that I was really interested in seeing the piece of the Berlin Wall they had. She looked a bit confused, but grabbed a museum map and told us that it was “between the pond and the windmill”.

Armed with this knowledge, my uncle and I set out. After a short walk off of Main Street, the recreation of pioneer-era Steinbach, we found the aforementioned windmill and then, a short distance away, the piece of the Wall standing, as one might imagine, rather incongruously in the middle of the Mantioba prairie. We approached and found an information plaque on the Wall, giving its dates and defining its purpose as a means of “separat(ing) the people of East and West Berlin” during “a time in history known as the Cold War.” On an adjacent info plate, there was some information about the Mennonite people’s connections to Germany and that was it. There was no attempt to create links where there were none, but I was still perplexed as to why the Wall had found its way here. The only explanation I can imagine is that the museum had room and was prepared to take what no one else would. Fair enough. 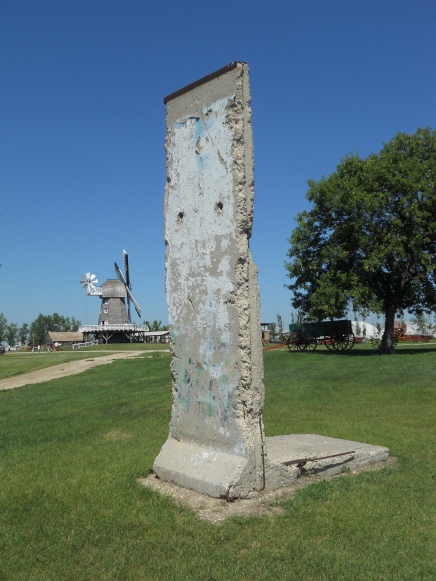 An Off The Wall Idea?

But I think there’s a further wrinkle to this story. As I write, construction continues in Winnipeg on the Canadian Human Rights Museum (CHRM), an institution which aims to be “a national and international destination-a centre of learning where Canadians and people from around the world can engage in discussion and commit to taking action against hate and oppression.” As one might imagine, there is considerable public interest in how the museum will examine this theme and discussion around the most appropriate way of doing so has generated  no small amount of controversy. In thinking about the mismatch of the Wall and the Mennonite Museum, it struck me that one way to address this might be to see this piece transferred to the permanent collection of the CHRM for display and contextualizing there. Indeed, I can think of no better setting to present information on the Cold War’s impact on human rights than the CHRM.

Marking the Wall’s ‘Anniversary’ in the GDR

When I first heard that the East German regime celebrated the construction of the Wall each year on August 13th, I was confused. Nothing testified, or so it seemed to me, of the failure of ‘real existing socialism’ as well as the Wall. But the Socialist Unity Party and its supporters didn’t see it that way. For many of them, and others in both Germanies and around the world, the Wall was a means to ensuring that this experiment in creating a more equitable, just society could continue without the ‘disruptions’ and ‘provocations’ from the West which a porous border allowed. The regime’s notion of the Wall as a defensive measure is reflected in the cynical official term it used for the structure: the Antifascist Protection Wall. I have several examples of the celebration of the Wall in my collection, one of which is a first day cover from August 1986 marking the ’25 Years of the Antifascist Protection Wall’

When Life Gives You Lemons: The Wall and the Federal Republic

After the formal division of the two Germanies in 1949, the Federal Republic (West) refused to recognize the German Democratic Republic (going so far as to refuse diplomatic relations with any nation that did up until 1970, a position known as the Hallstein Doctrine) and claimed to represent all Germans on either side of the inner-German border. The West GermanMinistry charged with breathing life into this policy was the Ministry of All-German Affairs and my collection includes two publications by it that focus on the issue of German division. The first is from 1959 and is entitled Mitten im Deutschland – MItten im 20. Jahrhundert (In the Middle of Germany – In the Middle of the 20th Century). This work focuses on the East German’s gradual sealing of the inner-German border, a project that effectively cut off most contact between the two countries.

A spread from In the Middle of Germany showing how the inner-German border has been fortified (1959).

The second publication is an English language book Berlin August 13 from 1965 which uses photos to chronicle the building of the Wall. It’s an excellent document of the official position from the early years after the Wall’s construction capturing both the West German government’s indignation and helplessness in the face of Communist resolve. The former is testified to in the book’s foreword by Ernst Lemmer, Federal Minister of All-German Affairs when he writes,

“The sealing off measures of the 13th August and the following days are to be accounted a declaration of bankruptcy on the part of the Ulbricht Government. By these measures the Government not only wishes to put a stop to the stream of refugees, but also to effect faits accomplis in Berlin and in the German question which are in the interest of its vile “two-state” theory.”(pg. 3.).

An example of the latter comes from the end of the same text when Lemmer pleads,

“In view of the acts of force with which the Communists seek to widen the division of Germany still further, it becomes more urgent to grant the right of self-determination also to the German people – the right to unite in a free and undividied Fatherland.”, Ibid.).

This series of photos shows how the Wall was fortified at one spot between 1961 and 1964. Note the high wooden wall which was initially used to block the line of sight into and out of East Berlin.

I first encountered the Wall myself in the spring of 1985 while on a trip to Berlin that was a highlight of my high school exchange program. Berlin’s reputation as a decadent site of thrills and danger preceded it and I recall being very excited by the trip. That my host parents were clearly a bit concerned as to what we’d get up to only helped heighten the anticipation. In the end, they needn’t have worried. A group of carefully chaperoned, good prairie kids were unlikely to get up to much trouble with a program as tightly packed as this (I remember the “Riverboat Disco” which was exactly as advertised, a disco. On a riverboat. We were the only ones on board. And the DJ played the 12″ version of Opus’ classic ‘Live is Life’. Twice. That’s not the sort of thing one forgets. They also took us to a circus. A bunch of 16 and 17 year olds. I was resentful of this, but when I saw “Wings of Desire” a few years later, I was glad at having had the experience of seeing a French circus up close. Who knows, perhaps Wenders was inspired by this same troupe who’d set up on a vacant lot in a run down part of the city?)

Also on the agenda was a visit to something like the American Information Center in Berlin, the PR office of the American army stationed in one sector of the city. Here an unfortunate junior officer laid out the political and military situation for our group in an entirely predictable, one-sided way. I don’t believe we could have been any more bored. Then we were dragged to Potsdamer Platz to underscore what we’d just heard about Germany’s division, etc., etc.. In preparing this post I came across a few shots I took at the Wall on that visit. I have decided to spare you these (save the “panorama shot” found in the header) because all they show is a group of teenagers trying to disguise their unease at the uncomfortable scene before them by behaving like a bunch of asses. (As you’ll see from the photo below, this phase lasted a while). It was interesting for me to find these pictures, because my memory of that visit had edited out the hijinks and kept the stunned feeling that I experienced while standing on the viewing platform and scanning the unreal scene before me.

Four years later, I returned to the city for two months of German study at the Goethe Institut in West Berlin. I’d been bitten with the Berlin bug and wanted another fix. During this stay, some friends and I took a walk in the woods on West Berlin’s northeastern fringe in a district called Frohnau. The path skirted the Wall and the photo below was taken that day. Looking at this now provokes mainly feelings of embarrassment: “Ha ha-larious! I’m going to go over the Wall!” That I had someone use my camera to take a picture suggests I found this scene much funnier than it was, but considering the picture again now, it strikes me that in some ways I am still scaling the Wall today. (Stay with me here!) In writing this blog, one could argue that I am still trying to see over the Wall and to understand what went on behind it in the German Democratic Republic.

“I gotta go over the Berlin Wall”, the author at the Wall near Frohnau in February 1989 (author’s photo).