My 2006 visit to Hoyerswerda is one the most memorable experiences I’ve had in the former-East, so when the opportunity to return presented itself, I jumped at the chance. In my role as Coordinator of the Canadian Centre for German and European Studies at Toronto’s York University, I was able to co-organize a study tour of Canadian graduate students to the “new German states” with my friend and colleague Dr. Marcus Funck in the fall of 2008. The tour itinerary looked at the impact of German unification from a variety of disciplinary perspectives and incorporated visits with a number of my previous contacts. From the beginning, it was clear to both Marcus and myself that Hoyerswerda should be included in our plans and what follows here is my diary entry documenting the beautiful sunny day our group visited Hoy in October 2008:

END_OF_DOCUMENT_TOKEN_TO_BE_REPLACED

We all have days that persist in our memory, ones that remain vivid despite the passage of time. This can result from any number of factors such as meeting particularly interesting people, experiencing things different from those part of one’s regular routine or perhaps visiting a place where the physical space imprints itself on onto your senses in a deep, affecting way. If we’re lucky, all three of those factors come together at once and for me they did in May 2006 when I visited the Saxon town of Hoyerswerda for the first time.

A ceramic sun shines through the grey from the wall of a block of flats in Hoyerswerda, East Germany’s second “socialist city” (photo: author).

When I first announced to my German friends that I was intended to visit Hoy, as it is known by locals, the general response was :”What do you want to go there for?” To be honest, the reaction didn’t surprise me as Hoy has become a sort of shorthand for the wave of xenophobic violence that shook parts of Germany in the early post-unification years. When economic and social upheaval gripped eastern German during the early 1990s, neo-Nazis and their allies skillfully exploited the situation to cultivate antipathy towards foreigners. Attacks on those visually identifiable as “non-German” became alarmingly commonplace in the former-East, but in 1991 in Hoyerswerda the violence took on, for the first time, the character of mob violence perpetrated over several days to the open approval of a significant portion of the local population.

The victims of these attacks were asylum seekers and so-called “guest” or “contract” workers who had been brought to work in local industry during the GDR era and had decided to try and stay on. These “outsiders” were concentrated in a handful of apartment blocks in the town, essentially segregated from the locals and essentially sitting ducks for the mob violence. Most shamefully, after several days of rioting and attacks on the foreigners’ homes, federal and state authorities capitulated to the violence and removed them from the town thereby handing a victory to neo-Nazis who subsequently celebrated their role in making Hoyerswerda “ausländerfrei” (“free of foreigners”). I certainly recalled the terrible images from the television reports: the buses of the asylum seekers and guest workers inching their way out of town to the jeers and cheers of the mob with a police escort that was unable or unwilling to even try to defend the terrified passengers huddling under blankets to protect themselves from the shards of splintering glass caused by rock attacks.

My motivation to visit Hoyerswerda, however, was not driven by any perverse kind of “catastrophe tourism”. END_OF_DOCUMENT_TOKEN_TO_BE_REPLACED

In January 1989, lured by the poetry of Wim Wenders’ classic film Wings of Desire and the tragic melancholy of Berlin’s division, my younger self headed to Berlin (for two months of German instruction at the Goethe-Institut just off the West’s main drag, the Kurfürstendamm. The weather was dark, damp and grey and most mornings my classmates and I made our way to the school under a blanket of what we all took to be fog. One morning during our break, our teacher overheard us discussing how it was that landlocked Berlin had such wonderful fog. A native Berliner, teacher proceeded to inform us that those grey clouds were, in fact, smog, specifically, a by-product of the coal ovens many Berliners used to heat their flats. “Had we not noticed the acrid smell in the air?”, she wondered somewhat perplexed. “That was the stink of brown coal briquettes”, she told us,  “and a symptom of a massive environmental problem!” And so I was introduced to brown coal (otherwise known as lignite) . . .

Two chimney sweeps’ bicycles parked in East Berlin circa 1993; note the bullet holes from WW II still unrepaired in the wall behind the bikes (photo: B. Newson).

As we explored the city over the following weeks, we began to notice ceramic-tiled coal oven in cafes and bars, usually in poorer districts, usually standing off in a corner of the room, emitting a lovely warmth into the room and a cloud of pollution into the air outside. When asked about the ovens, the locals would either decry the environmental cost of their use or praise the “gemütlich” (“cozy”) quality of the heat. Not surprisingly, the situation was no different on the East side of the Wall with the tenements of the old working class districts of Prenzlauer Berg, Lichtenberg and Mitte heated largely by identical brown coal ovens.

END_OF_DOCUMENT_TOKEN_TO_BE_REPLACED

This week’s post will wrap up my examination of the lives of Benno and Christel B., two GDR citizens from what has been labelled the Aufbaugeneration (“Construction Generation”), a cohort born between 1920-1935 which made up a significant chunk of the socialist regime’s loyal supporters. (For previous entries on this subject, see Part 1 and Part 2.) By considering a number of items and documents which once belonged to the couple I hope to illustrate a number of storylines from the GDR’s history. Here I’ll focus on the life of Benno B. after he and his wife Christel made the fateful decision to leave their Heimat northeast of Berlin for Hoyerswerda, the GDR’s second “socialist city” which sat in the relative isolation of the Lausitz, the country’s brown-coal mining region.

Plaster of paris bust of V.I. Lenin presented to Benno B., most likely in 1970 during the so-called “Lenin Year” which marked the 100th anniversary of the philosopher’s birth. (photo: R. Newson).

END_OF_DOCUMENT_TOKEN_TO_BE_REPLACED

This week’s post will continue examining a number of items which once belonged to Benno and Christel B., two Party loyalists from the socialist city of Hoyerswerda. Last week’s post parsed the the life of Christel B., a task made possible thanks largely to a short biography which she submitted in 1972 to some sort of Party office. This document provided considerable detail on Christel’s activities up to 1972, however, my collection of materials unfortunately sheds little light on her life after this point.

In the case of Christel’s husband Benno, the situation is reversed. It is his early years which remain opaque, while a collection papers from his time working at Hoyerswerda’s Combine “Black Pump” as both a functionary of the Socialist Unity Party (SED) and a senior member of his plant’s Combat Group give a fairly clear sense of his life from 1959 onwards.

Benno B.’s Early Years: What We Know, What We Can Surmise

Included in the materials I acquired on Benno and Christel B. were a number of evaluations done of Benno by various Party bodies between 1965 and 1982. These documents include details on Benno’s background and form the basis of the biography which I piece together here.

The only information that can be gleaned about Benno B.’s life before the end of World War II is that he was born in Liepe District Angersmünde “to a family of workers” (Evaluation by Party Secretary Zirz from Jan. 16, 1967, pg 1.) on July 14, 1921, an area just to the north of the Bad Freienwalde/ Eberswalde area from where his future spouse, Christel, was raised. The various documents contain no information on his youth which is not that surprising, but they are also silent on his activities during World War II. This strikes me as remarkable since It Benno B. would have been a healthy young man of fighting age during the period and it seems unimaginable that he could have escaped being mobilized into the German Wehrmacht for at least some of this time. 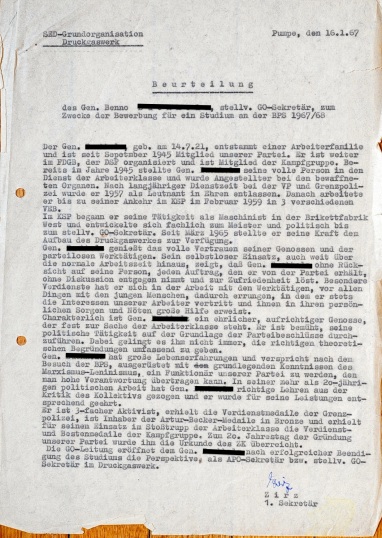 Evaluation of Benno B. done by the First Secretary of the SED Basic Organization at Combine “Black Pump” as part of attempts to have Benno accepted to the District Party School in 1967 (photo: R. Newson).

END_OF_DOCUMENT_TOKEN_TO_BE_REPLACED

Some time ago I came across an eBay listing for a collection of certificates, awards, pins and various other relics of a life lived as a loyal citizen of the GDR. This was not that unusual as eBay is flooded with this stuff, but what made this listing intriguing was that it was claimed that the items being auctioned all belonged to one person. Interest piqued, I made a bid and was lucky enough to win out. While making shipping arrangements with the seller, I asked whether he had any information on the individual to whom all these things had belonged. “Yeah, I’ve got a couple of reports, a CV and some other stuff lying around. You want me to throw these in the box?” Uh, yeah, I did.

When the package arrived a number of weeks later, I began sorting through my purchases and was astounded by what I discovered. These items had belonged to a couple each of whom were born in the 1920s and so members of the Aufbaugeneration, or “Construction Generation”, which formed the nucleus of the regimes’ supporters. The documents which had been sent included a biography of the wife written in 1972 along with a number of evaluations the husband, a Party functionary, done by various Party organizations. The more I read and sifted through the box, the more I came to see that these items spoke not only of this couple’s experiences but could function as representative of the lives of a much wider section of East German society.

Over the next several weeks, I’ll be telling the story of this couple to the extent that my items allow it, and I hope that you find it as interesting as I do.