In 2008 I had the pleasure of working with Dr. Marcus Funck, my friend and colleague from the Canadian Centre for German and European Studies to lead a study tour of Canadian graduate students to the former-East. The central theme of our trip was transformation and one of our aims was to expose the group to what this process had been like not only in the major cities such as Berlin, Leipzig and Dresden, but in smaller centres as well. Given the way in which Eisenhüttenstadt had been connected to the old regime, we were confident that including it in the itinerary would be useful and I’m pleased to say that we were not disappointed. 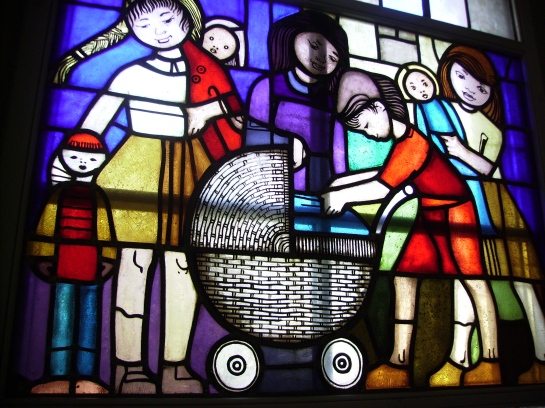 Our contact person in the town was Mr. Harmut Preuß, the new director of the City Museum which I had visited a few years previous. In advance of the tour, Mr. Preuß was very helpful and accommodating as we consulted on our itinerary for our stop in Hütte. When the day of our visit arrived, he and his wife met our group at the train station to ferry us and our things to his museum for storage before we started our day together. In GDR times,  Both Mr. Preuß and his wife had been a school teacher, but he’d lost his position after the Wende, landing in the city’s Culture Department before taking over the City Museum several years ago.

Stained glass by Walter Womacka from 1950s in stairwell of the Documentation Centre (photo: F. Peters).

Documentation Centre for Everyday Culture in the GDR

The first stop on our schedule was the Documentation Centre for Everyday Culture in the GDR. Founded in 1993, the Centre has made an important contribution to the presentation and study of East German daily life under the direction of its founding director Dr. Andreas Ludwig. Housed in a beautifully renovated former daycare centre in WK I, the Centre was a prime reason we wanted to include Eisenhüttenstadt in our itinerary. We toured the permanent exhibit with Mr. Preuß and he peppered his narrative with plenty of stories from his own life. One that has stuck in my memory is when he used our visit to a room dedicated to the socialist daycare system to weigh in on a debate that was gripping Germany at the time. At the centre of this controversy, was the question as to whether socialist daycare practices had produced a generation of maladjusted individuals. Spurred on by several horrific incidences of child neglect and abuse in the former-East, several West German “experts” had advanced the theory that the East German childcare system had left many of its charges socially maladjusted and prone to behaviours of the sort that had been behind these terrible acts.

It was certainly true that daycare was a common experience for East German children. Indeed infants were typically delivered to daycares very quickly after birth as their mothers’ labour was needed in the economy, so as a result, some 80% of GDR children ages 0-3 years were in public care. Given how widespread this practice was, it was naturally a subject with which most eastern Germans were personally familiar, and Mr. Preuß effectively expressed the prevailing view of many easterners that it was unreasonable to blame the practice of potty training children en masse for the appalling acts that had set off the debate. It was interesting to see the fault lines between East and West as they ran in the present day exposed in a setting such as this. 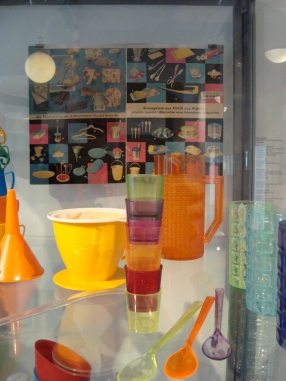 Ah, plastics! Display of “1000 Little Things” from Documentation Centre for Everyday Life in the GDR in Eisenhuettenstadt (photo: F. Peters)

Canned meats as part of an exhibit on shopping the GDR (photo: F. Peters).

A robotron PC, state of the art pirated from IBM (photo: F. Peters). 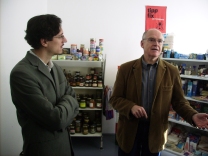 After viewing the main exhibit, we were taken to a recent addition to the Centre’s exhibition repertoire, an apartment in one of the original WK I apartment blocks that had been furnished with items from the early years of Hütte’s existence. Of the eight units in the building, only two were still occupied, and one of the two old ladies who live there had the key for the “museum flat”. Frau K. was more than happy to share her story with our group and she made a real impression on them. Her family’s story was typical for the town: born into a family of few means (German: “einfache Verhältnisse“) they had come to the new town for the opportunities it offered to them and, according to Frau K., their expectations had been met. Frau K. had become a teacher of Staatsbürgerkunde, the East German version of civics, a subject typically entrusted to Party loyalists given the key role education was to play in creating the socialist personality. Life in Eisenhüttenstadt had been good, in the GDR period, she told us. People here didn’t want the Wende, they hadn’t gone out to protest. (ed. Essentially true: Hütte was a relatively young city where life was, by GDR standards, quite good. Given its important economic status, the town was well supplied which kept disgruntlement in check. Also, the shift system made protesting difficult for workers as 2/3 of mill employees would have been working or sleeping at any given time making it hard to rally a critical mass of critics.) The results of unification spoke for themselves, she said. The work in the steel mills had disappeared. Her children had all been forced to leave the town to find work and she’d been left all alone. As she related her situation to us, Frau K. had to fight back some tears.

Frau K’s building in WK I; note the GDR-era moped parked next to entrance (photo: author) 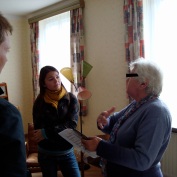 Not a dry eye in the house. Well, maybe a couple (photo: author).

In the train as we made our way to Cottbus at the day’s end, the visit to Frau K. came up and most of the students felt a great deal of sympathy for her. It was fascinating listening in on these conversations to see what the students had taken from their experiences. As they discussed Frau K’s situation, the oldest member of the group, a PhD candidate named Frederick couldn’t hold back: “Give me a break! That grannie had you eating out of the palm of her hand. She was a Staatsbürgerkunde teacher! Who knows how many people she wrote off? Don’t feel too sorry for her.” (ed. Staatsbürgerkunde teachers were often called upon to do assessments of students’ political reliability and attitudes and these documents were key in determining, amongst other things, a student’s suitability for access to higher education. A negative assessment from someone such as Frau K. could easily go a long way to limiting one’s life and career options).

A Visit to City Hall

We then headed over to City Hall where Herr Matthias Rogge from the city planning department gave us an overview of the reality in this shrinking city. The town, he told us, had lost about 40% of its residents since its peak in 1988. At present, it had around 32,000 inhabitants, but the trend was downwards. To counter this, the town had focused its energies on reducing itself to a viable core. This meant tearing down large numbers of prefab apartment buildings at the peripheries and investing in the town centre. The original Wohnkomplexe I-IV had all received historical designation and some funds had flown into their renovation. The results were quite lovely, but there were challenges. The historical status, he explained, meant that the buildings had to be restored to their original condition and this often made them unattractive to would-be renters. For example, balconies were not included in the original GDR designs, but were often important to tenants now. While the town had been able to negotiate permission to add these to some buildings, this was the exception and something that had to be dealt with on a time consuming case-by-case basis. 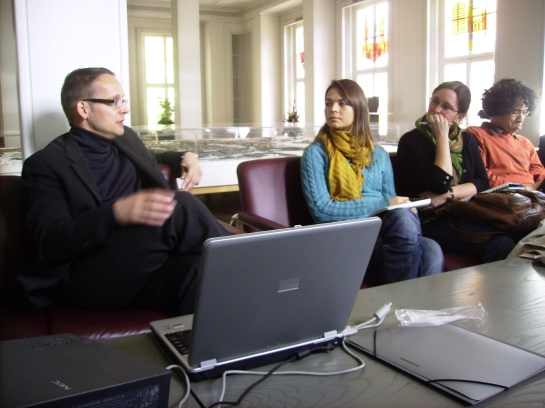 Matthias Rogge from the city’s planning department briefs us on the situation facing the town (photo: author).

Afterwards, during a walking tour of the “core districts”, I got a chance to speak with him at length. I asked how he’d come to Eisenhüttenstadt and he related that the challenges on offer here were far more appealing than elsewhere. Having been raised in Bremen (where his father was a planner who worked on that city’s massive Neue Vahr Süd apartment district), Rogge had studied the traditional urban planning curriculum in the West, but as he noted wryly, “Nothing we learned there prepared me for this. There we learned how to build cities, not tear them down.”

Close-up of relief on building in WK III (photo: author).

Herr Preuß accompanies us on our walking tour (photo: author). 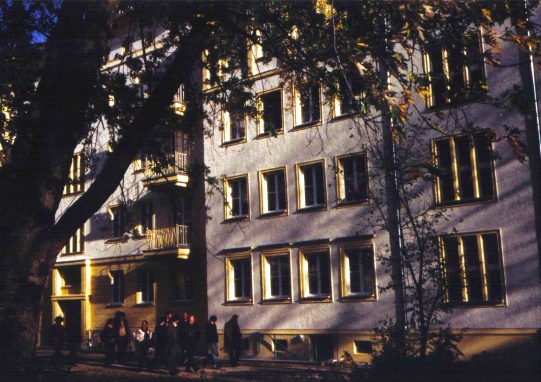 As we strolled through the beautifully renovated town core, it was hard not to be both impressed and depressed. While the backdrop was frequently stunning, there was almost no life on the streets despite it being a gorgeous Saturday afternoon in mid-October. As we walked, a youth on a bicycle stopped and asked one of our group what he was taking pictures of. When our student told him he was photographing the city, the local seemed confused as if the notion that anyone might be interested was completely foreign to him. 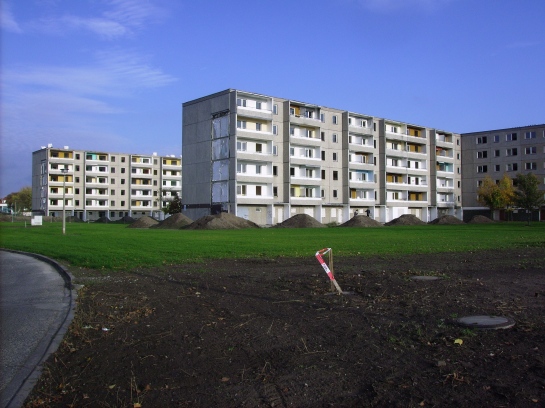 “Selective deconstruction’ on the eastern edge of town (photo: author).

We ended up at Mr. Preuß’ CIty Museum, after a quick trip through the 80s-era WK on the city’s eastern edge. Here, there has been a lot of removal of empty flats and this has led to some surreal scenes in which newly paved roads wind through empty fields of dark soil bordered by the remaining blocks, enclaves of habitation in a desert-like setting. Very odd.

Back at the City Museum, Mr. Preuß gave us a nice tour of their revised permanent display on the area’s history, including some great artifacts (e.g. an original Stalinstadt sign). Under Mr. Preuß’ direction the museum had begun to address more thorny subject matter than had previously been the case. The year before, they presented an exhibit on the Stalag camp from the World War II era which had stood on the site of the steel mill. Here Soviet P.O.W.s had toiled for the Nazi war machine with thousands paying with their lives. It’s a part of the area’s history which not all were happy to see addressed, but Mr. Preuß was unrepentant:  “I tell them, ‘I’m sorry, but that’s your history!'”