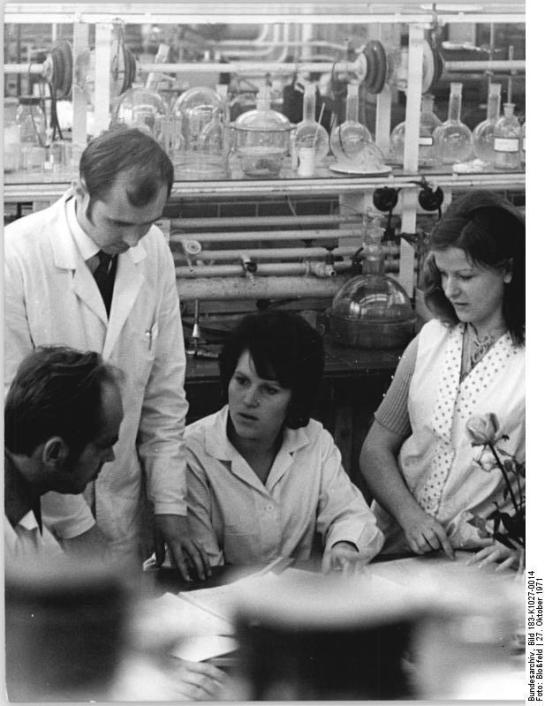 In our previous post on the Chemical Works at Leuna and Buna, the focus was very much on the political and economic history of those sites. But what was working life like for the nearly 50,000 East German workers who were employed at these works (28,000 at Leuna, 18,000 at Buna)? In this post, I’ll speak to someone who did just that in the hopes of getting a glimpse into the life of a blue collar worker in the “Workers and Peasants State”.

A Socialist Education in Chemistry: Micha B. at Buna

Several months ago, I had the chance to sit down with my friend Micha B. to talk about his experiences as an apprentice and worker at Buna during the final months and years of the GDR. 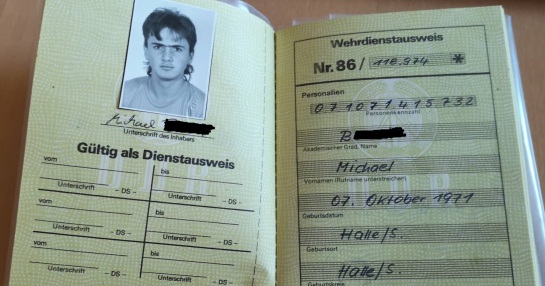 Micha was only 18 years old in the fall of 1989 and in the middle of an apprenticeship at Buna. Having grown up in Halle-Neustadt, a planned citydesigned to house workers employed in the area’s “Chemical Triangle”, I wondered whether young people were directed to employment in the chemical industry, but Micha told me that he didn’t feel this was the case:

“In the final analysis, Halle-Neustadt was built to support the chemical industry. Everything that happened there was oriented to Leuna and Buna. But if a student wanted to do something other than work in the chemical industry, that was possible too. Like police officer, teacher or even study at the university if you had gotten a spot there.”

I asked him how it was that he ended up at Buna:

“I was in the 7th grade when they asked us for the first time what we wanted to be and I think 12 or 13 boys all said “auto mechanic”. I had no idea at that point, but in the years that followed, I thought about it and decided I wanted to do what my mother did: “Chemical Production Technician” (GDR title: Facharbeiter fuer chemische Produktion). This was a laboratory job and my thinking was ‘I don’t want to get my hands dirty!’ In retrospect, that wasn’t necessarily the case, but I was more interested in doing monitoring or quality control, being involved in the chemical processes, rather than being say, a metal worker taking pumps apart and putting them back together. That just didn’t have any appeal to me.”

After completing the Polytechnical High School (GDR title: Polytechnische Oberschule / POS) in 1988, Micha began his apprenticeship at Buna. He recalled how this was structured:

“Right from the beginning, all the apprentices were assigned to a shift which meant we had a fixed workplace and colleagues, a Brigade which we belonged to. And we would rotate in and out of the shift. You would work with your shift for a while, then there would be a week of classroom instruction.” 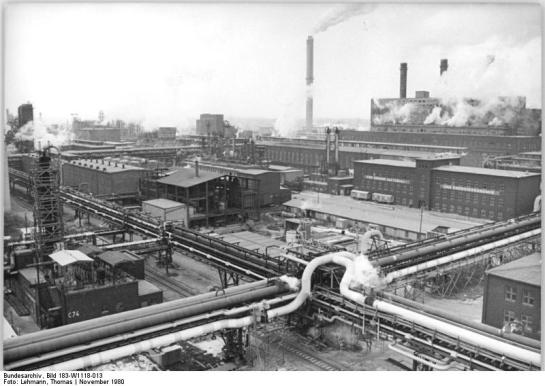 Those familiar with Germany’s apprenticeship system will not be surprised to learn that the system employed at Buna was rather complex. After confusing me briefly with a flurry of job titles and their corresponding activities, he kindly laid things out for me more clearly:

“There were different levels of apprenticeships and they all took three years to complete. If you’d left school after the 8th grade, you could become a “Chemical Technician” (Chemiefacharbeiter). Those people worked one or two days a week in the lab and needed to accumulate six months of experience there before they got their papers. Those who had done up to the 10th grade, like me, could do training for “Chemical Production Technician”. Those who had gotten good grades through the 10th grade could work towards the job “Chemical Production Technician with Abitur”. (Abitur was the high school finishing certificate entitling its holders to attend university and desirable for those with ambitions of upward mobility; in the GDR access to high school offering this accreditation was carefully controlled by authorities and a frequently used tool to ensure the behaviour of parents and their children were in line with mainstream socialist norms, ed.) If you had those papers, you could get a better position, earn a bit more.” 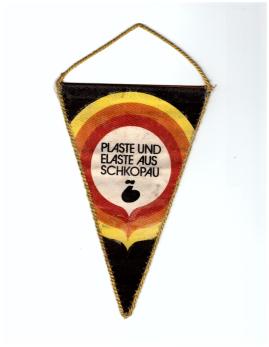 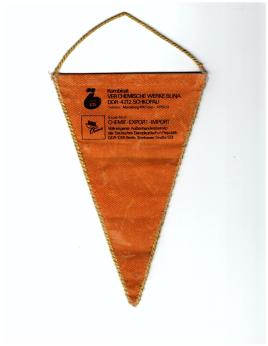 I wanted to understand how everyday life looked for an apprentices and Micha provided these recollections:

“During the apprenticeship, you began with the shift work and were totally integrated into the work system, part of a Brigade, that sort of thing. In the first couple of years, you would alternate back and forth between the workplace and the classroom. Sometimes you’d spend a couple of days at work and then go back to the books, but hands-on training at the workplace was always part of it. There, the apprentices were trainees, but we had certain responsibilities too. At the start, we accompanied the technicians as they went about their tasks and showed us the ropes. Later, we did those things without their supervision. After the second year exams, you were still training, but the classroom part was done and now your training happened all on the job within the regular work rhythm, that is, within the shift system.

At that time, and to the best of my knowledge this is still the case at Buna, working the shift system meant that you worked a 12-hour shift, from 6 am to 6 pm. Then you had 24 hours off, did a 12 hour night shift from 6 pm to 6 am, another 24 hours off before you did another 12 hour day shift. Then you have a ‘sleep day’ and two days off. Then it started over again. It was tough.” 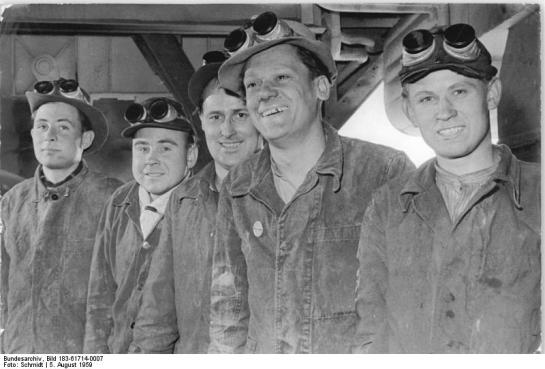 As Micha told it, the demands of the shift system had a significant impact on the lifestyles of those who worked within it:

“The shift schedule meant that an important part of a worker’s life took place on shift, with your coworkers. You cooked together at work, everyone sat at the breakfast table or for lunch, coffee breaks. You did it all together. The older women would sit there and knit, or they’d clean up after everyone. The men had other jobs or chores for the shift. The younger workers, the apprentices, we all had our duties too. That was totally normal. I was part of that group and I recall that we (the apprentices, ed.) were all pretty withdrawn, quiet. You knew your place and didn’t have much to say at that stage.”

(Warning: big digression: Interestingly, this memory conjured up scenes from my time teaching in rural Saxony in the late 90s. I worked in a retraining project for long-term unemployed and our instruction day began at 7:30 am with a first break coming an hour later. When we reached that point, virtually all the class would reach into their bags and produce their ‘second breakfast’. One or two would hop up to make coffee and tea and then everyone would sit around and chat, discuss their families, last night’s tv program, whatever. I’d never seen anything like this, but it was clear that this was something practically all my students had been doing for some time (typically the younger ones, a small minority of class, tended not to participate, something I put down to the age difference). Hearing Micha describe the scene above and recalling that virtually all of my students had formerly worked in a large-scale textile mill that had been shuttered post-unification, I suddenly realized that my students were replicating these collective meal times from their shared GDR-era factory shift work past, ed.)

Micha also remembers how Leuna and Buna, and the difficult physical nature of some of the work there, helped breed a “hard working / hard living” lifestyle which many workers embraced:

“I remember sometimes at the end of a shift, some of the workers would gather on the train platform and start to drink this really nasty high alcohol content liquor. The booze would start to flow after a night shift and continue in the train for the twenty minute trip back to Halle-Neustadt.” 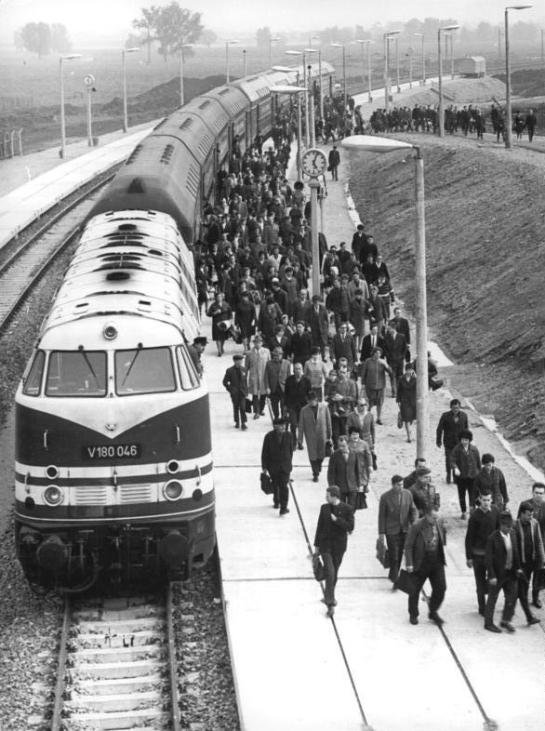 In terms of working conditions, Micha has vivid memories of the aging infrastructure at Buna (see previous post for details on this):

“Sometimes when you’d walk down the long, long roads between the huge work halls on either side of you, like they went on for miles. Above if you looked up, you’d endless amounts of lines and pipes snaking from one hall to another. One would be leaking, another letting off clouds of gas or steam or who knows. Thinking back, it was a frightening scene, rather horrifying really.

I was lucky because my plant at Buna manufactured rubber for the tire industry and it was only about twenty years old at that time, so relatively new. But there facilities there where things looked really different. For example, where my mother worked, or some plants where the way they handled mercury would make your hair stand up.”

When I asked him why so many people chose to work at Buna if the conditions were so terrible, Micha was frank: “The people who worked there, they made good money, on average about 1,000 Marks a month or more. For GDR workers, where the normal person brought home 8-900 a month, that was really good.”

Around the time of German unification in October 1990, Micha took some photos of the artificial rubber plant where he worked at Buna and you can see them here:

What about political life at the plant? I wondered how the SED’s political agitation would’ve looked at that time, but to hear Micha tell it, the Party tread pretty lightly at the level of the shop floor by the time he got to Buna. He remembers:

“They [responsible SED cadre, ed.) wanted to channel some of us into the Party pretty much right away during the apprenticeship. I always turned away from that, I was too proud for something like that and because of that, they knew not to even bother asking me. If you joined up, you could expect a more interesting job maybe, more responsibility, more money of course, but, no, I didn’t want to be in the Party. I didn’t see any point to it.”

Micha stayed on at Buna past unification, in fact, he told me that, had he not quit in 1991, he would likely still be there today as the facility he worked at remains in operation (unlike so many other GDR-era industries).

Leuna and Buna After Unification 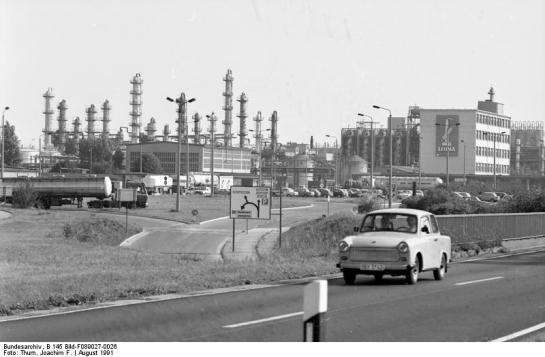 Relatively speaking, Leuna and Buna can be seen as post-unification success stories for eastern Germany and its economy. Leuna was privatized into a number of smaller industrial units with some closing altogether. The petrochemical facilities, Leuna II, were sold to the French company Elf Aquitaine under dubious circumstances, a transaction which resulted in criminal proceedings. As a result of these upheavals, more than two-thirds of the employees were let go and the facilities now provide work to approximately 9,000 people. At Buna, the loss of workplaces has been equally dramatic. From 18,000 in the GDR-era, the successor facilities are estimated to employ between one-quarter and one-third as many people today. 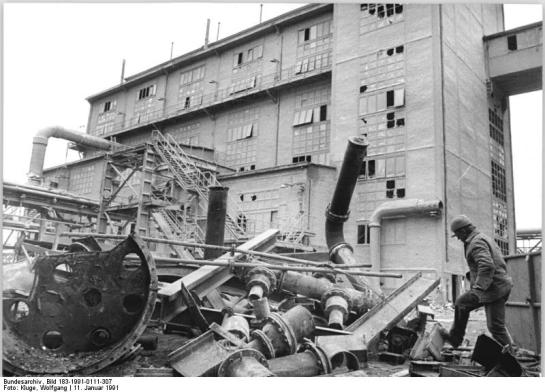