The Amiga pressing of Bruce Springsteen‘s Born in the U.S.A. album appeared in 1986 and was one of the prime examples of the socialist regime’s attempts to court East German youth. Given Springsteen’s working class roots and image, it might seem that it would not have been a huge stretch for GDR authorities to approve him for presentation their impressionable youth. However, the context of this decision is remarkable for, at that time, Springsteen represented for many – rightly or wrongly – a nostalgic, apolitical image of the United States and its values.

Given this, it is not surprising to read the essay found on the back of the Amiga pressing. This goes to some lengths to make the case for this record, emphasizing that the title track must not be understood as a “chauvinist elegy” (as Ronald Reagan’s campaign team did in using it in his 1984 Presidential election campaign), but rather as a “settling of accounts with past and current American realities”. Particular mention is made by the author of an endorsement Springsteen received from folk icon Pete Seeger during that year’s Festival of Political Song in East Berlin, a reference intended to establish Springsteen’s progressive bona fides. 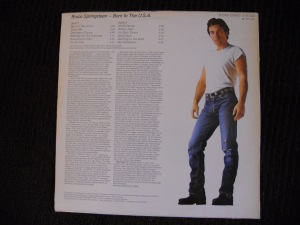 The state’s attempts to instrumentalize Springsteen reached their peak with an invitation to perform in the country in 1988. This concert in East Berlin was the largest in GDR history with over 160,000 people in attendance and it cemented the close bond between the performer and East Germans. Springsteen gave a typically tireless performance and provoked a huge reaction when he called for all “barriers to be torn down”. The concert was broadcast on East German tv and had been promoted widely in the state media. Given this profile and the resonance with which Springsteen was met, authorities were left with no choice but to publish approving reports and reviews of a show that ended up whetting its citizens’ appetites for more of the same. A Reuters article on the concert’s 20th anniversary goes some way to relating the importance of this event for an entire generation of East German youth. A piece from England’s Guardian on the 25th anniversary of the show makes a similar case, arguing that the gig played a role in driving the desire for change amongst young East Germans and referring to Stasi reports to the Party leadership making the case for why the concert should be allowed to take place (these largely centred on Springsteen’s ‘working class’ background and critique of his homeland). It’s worth a read, so please do.