Whenever I’m in Germany, I try to spend some time in places which evoke the former-East. With the passage of time, this has become increasingly difficult, but there’s one destination which has never failed to engage my powers of imagination: Berlin’s Karl-Marx-Allee. I think part of the reason is that the Allee today is quite dead, the relative calm allowing one to project one’s thoughts onto the scene without much competition from a contradictory present.

The Allee was in two phases between the early 1950s and mid-1960s and as a result the street manages to embody a significant chunk of the GDR’s architectural history and since it also served as the stage for some of the country’s most important events, there’s never a shortage of interesting things to observe and consider. (I’ve written a lengthy piece on the Allee’s history which includes a number of, if I do say so myself, fine pictures, so if you have have any interest in that angle on things, I’d encourage you to click here.)

First up is an original Meissen porcelain tile removed from one of the Allee’s apartment blocks during the renovations which took place in the 1990s/early 2000s. The choice of Meissen porcelain for the facades of the Allee’s buildings was intended to underscore their status as “Workers’ Palaces”, however, the material proved ill-suited for the task at hand and by late-period GDR, falling tiles were a real hazard on the Allee. During renovations in the late 90s/early 00s, all the exterior tiles were removed a number of these were saved to be sold as a fundraiser (how I got mine) for a social service agency which operates the Cafe Sibylle, one of the few GDR-era businesses to have survived unification. Even if you’re not keen to acquire a porcelain tile from the Karl-Marx-Allee as a souvenir, it’s worth seeking out the cafe if you visit Berlin as they have lovely homemade cakes and a very good exhibit on the history of the Allee. 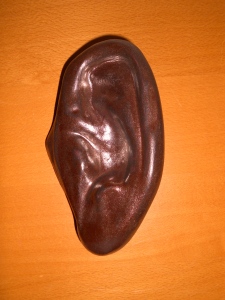 For the first decade of its existence, the Allee bore the name of Soviet leader Joseph Stalin. WIth his fall from grace during the Krushchev years, the GDR was faced, as were so many other East Bloc states, with the dilemma of how to till the references to the once-beloved Communist icon from their streetscapes. In the case of the Allee, the action to remove Stalin’s name from the boulevard occurred overnight on November 13, 1961. Under the supervision of the Ministry for State Security, workers replaced the street signs and dismantled and removed the almost 5-metre tall Stalin statue from its prominent site. (A sober announcement on the changes from the East Berlin Magistrate’s Office was printed in the next day’s paper – it made references to the uncovering of Stalin’s ‘actions harmful to the revolutionary cause’)

The story is that the statue was then taken to a nearby work hall and a crew of workers were ordered to cut it up and render it unrecognizable. During this activity, several workers apparently managed to hide pieces of the statue (part of the “Great Man’s” moustache was taken as well) and, after the fall of the GDR, these items were donated to a group working on the history of the Allee. This group in turn has made “Stalin’s ear” available to the operators of Cafe Sibylle who sell clay replicas of this item at the cafe.

It is believed that the bronze recovered from the statue was used to cast a number of animal statues which grace the East Berlin Zoo.

Given the Allee’s importance as a representative boulevard and “the first socialist street in Germany”, it should come as no surprise that it made several appearances on stamps issued by the GDR Postal Service. I’ve acquired the three below.

An 84 Pfennig stamp from the Karl-Marx-Year (1953) featuring the philosopher’s likeness in front of a scene from the Stalinallee.

A scene of Stalinallee from a 1955 issue (note the logo of Five Year Plan in lower right corner).

The Allee’s Strausberger Platz as designed by Hermann Henselmann. This stamp is from a series of stamps recognizing the GDR’s cities issued in 1969 to mark the state’s 20th anniversary.

While not technically items of GDR production, I did not hesitate to buy cardboard scale models of one of the original Stalinallee apartment blocks (the iconic Block “C” which housed the Karl-Marx Bookstore on its main floor) and the Cafe Moskau, one of the highlights of the Allee’s modernist second phase. These pieces are produced by a Berlin designer operating under the name of Faltplatte (which translates roughly as “Foldable Prefab Block”). There are a number of other East Berlin landmarks included in the series and I toyed with the idea of using some of these to recreate the area around the House of Teachers opposite Alexanderplatz. For once, however, reason intervened and the project remains unrealized.

“He who builds like this, builds for peace!” – tag from my reprint of a 1952 paper model of Block “C” of the Allee

Central tranche of Block “C”: note Karl-Mark Bookstore (as seen in “The Lives of Others”) on the main floor

Stalinallee Block “C” by Richard Paulick from the air

Block “C” of the Allee was designed by one of the GDR’s most prominent architects, Richard Paulick. A product of the Bauhaus’ Dessau years (1920s), Paulick’s innovative, modernist designs won him considerable attention even during his student years. With the ascension of the Nazis to power, however, Paulick correctly assumed that his leftist politics would make him a target and fled to China where he was able to continue his work through the war years. He returned to Germany in 1949 and made the decision to settle in the GDR in the belief that his values were better reflected by those of the Soviet client state. Once here, he quickly became a leading figure in the rebuilding of East German cities and towns. Besides the Allee project, he also oversaw the design and construction of two planned cities, Hoyerswerda and Halle-Neustadt.

Cafe Moskau as seen from Karl-Marx-Allee.

Cafe Moskau from above: note the courtyard and fountains in the garden at the top of the photo

The Cafe Moskau was built in 1964 and was a popular destination for East Berliners looking for a night out. It contained a “night bar”, a casual dining room, a wine bar, a tea room as well as facilities for concerts and private functions. Because of its busy location, the building was designed around an atrium; it’s first floor was carefully protected visually and aurally from traffic noise. The second floor tea room was glassed-in and offers views of the hustle and bustle below. Artwork in and on the building contained scenes of Soviet life and people while the courtyard and gardens were decorated with a custom-designed, “floating” concrete wall and a series of fountains. Attached to the building’s south end was the beauty salon “Babette” which, with its yellow ceramic tiles, complemented the Allee’s other ceramic tiled, pavilion-style service buildings.

Today the Cafe Moskau is used for special events including dance nights, exhibitions and the like. 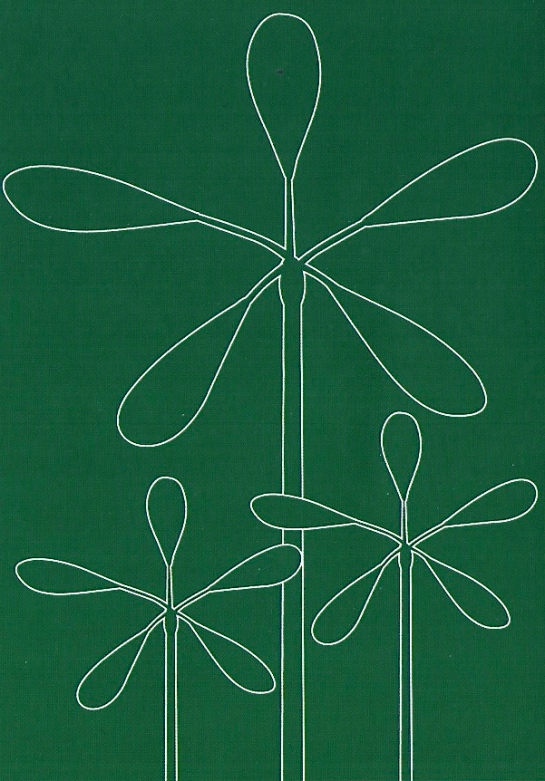 Graphic postcard of the street lamps found on phase II of the Allee and on Alexanderplatz.

For a lovely clip of the Allee under construction in the early 50s, check out the clip below (thanks to andBerlin.wordpress.com for finding this!):