My most recent visit to Germany this past March began in a most memorable and, for me at least, distinctly German way. Immediately after landing in Frankfurt, I boarded an InterCity Express for Berlin. Just before our first station stop in Frankfurt proper, the train came to an unscheduled halt right next to an allotment garden colony (speaking of which, read my post on GDR allotment gardens by clicking here). Germany received an early spring this year and it was a glorious day: 25 C, sunny with the trees and gardens lush and green. As I sat at my window seat reading the paper, a movement in the corner of my eye caught my attention. I turned to see the high shrubs directly adjacent to the tracks rustling. A second later two hands emerged to pull the branches aside and when they did a 70-something gentleman (on this point I am perfectly clear), emerged, his shock of white hair only slightly contrasted by the even whiter tone of his pasty skin. All of his pasty skin in fact. And for the next 10-15 seconds those travellers with the fortune to have been gazing upon the garden colony were subject to a scene of full frontal nudity courtesy of this elderly man. His curiosity satisfied, he let go of the branches, turned and disappeared Yeti-like back into his plot, and my mind began formulating “Welcome to Germany” tourism posters featuring the image that had just burned itself into my brain. 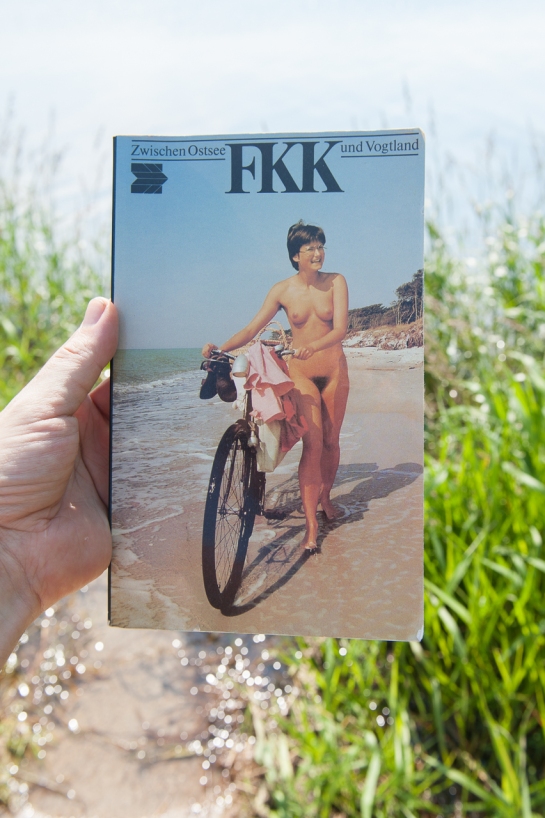 Cover of FKK: From the Baltic to the Vogt Lands, a guidebook to naturist sites in the GDR taken from my collection (photo: Jo Zarth)

Before I went to live in the eastern German city of Leipzig in 1999, I didn’t consider myself particularly prudish or uncomfortable with public nudity. If I had reflected upon this, however, I likely would’ve recalled a story from my youth that revealed some Ur-anxieties with the concept. I was probably eight and my younger brother about six when my parents announced that our family would be going to a retreat weekend at a monastery just outside our hometown of Saskatoon. My brother and I balked at the idea, a reaction that confused our parents. Why, they asked, did we not want to go? We answered it was because “a monastery is a place where people get undressed in front of each other.” I have no recollection where we got that idea from, but I do remember our distinct unease with the plan despite our parents’ assurances that nothing of the sort would happen there. (It didn’t, in fact, to my great relief we had a private room to ourselves!)

Years later, as a young adult, I thought such hang ups about public nudity were behind me, but that was likely because living in English speaking Canada, I was never confronted with any. Before relocating to Leipzig, I was aware that Freikörperkultur (FKK), “free body culture” or what in English would be known as naturism or nudism, enjoyed considerable popularity in Germany, particularly the former East, but it did not occur to me that I would encounter this cultural practice during my time there or that it would cause me any problems.

But encounter it I did. END_OF_DOCUMENT_TOKEN_TO_BE_REPLACED