This week’s post will wrap up my examination of the lives of Benno and Christel B., two GDR citizens from what has been labelled the Aufbaugeneration (“Construction Generation”), a cohort born between 1920-1935 which made up a significant chunk of the socialist regime’s loyal supporters. (For previous entries on this subject, see Part 1 and Part 2.) By considering a number of items and documents which once belonged to the couple I hope to illustrate a number of storylines from the GDR’s history. Here I’ll focus on the life of Benno B. after he and his wife Christel made the fateful decision to leave their Heimat northeast of Berlin for Hoyerswerda, the GDR’s second “socialist city” which sat in the relative isolation of the Lausitz, the country’s brown-coal mining region.

Plaster of paris bust of V.I. Lenin presented to Benno B., most likely in 1970 during the so-called “Lenin Year” which marked the 100th anniversary of the philosopher’s birth. (photo: R. Newson).

END_OF_DOCUMENT_TOKEN_TO_BE_REPLACED

The completion of the Palace of the Republic in April 1976 marked the end of the largest prestige project in GDR history. The building costs were officially 485 million East Marks, though internal figures presented to the Minister of Construction increased the sum to 800 million. Other sources have put the total price tag closer to 1 billion Marks. Regardless of this, the money spent was considerable for a country the size of the GDR and the project had significant impact on the country’s finances. Its prioritization also created significant resentment in the “provinces” as many resources (incl. materials and construction crews) were redirected to the capital to ensure this job was completed on time.

For the Party, however, there was a feeling of a job well done. To mark the opening of the Palace, the GDR Post issued a stamp featuring the image of the finished Palace and a construction worker. This stamp also incorporated mention of the 9th Party Congress of the SED which took place there in May 1976. 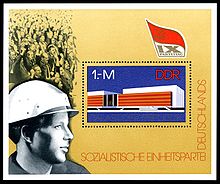 Stamp issued by GDR Postal Service to commemorate the opening of the Palace in April 1976 and the SED’s IX Party Congress held there the next month.