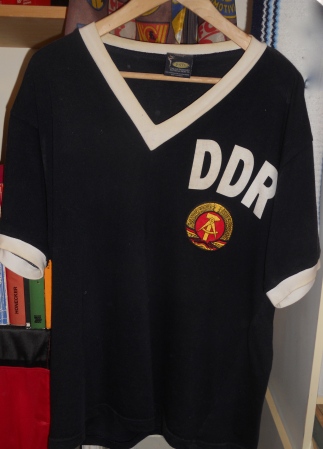 My collection includes this replica of the jersey worn by the GDR team when they defeated the BRD 1-0 at the 1974 World Cup (photo: author).

The GDR was a footballing nation and in this respect at least, its leaders were in tune with their populace. The members of the ruling Party’s Politbüro, the seat of power in East Germany, apparently spent much time “discussing football results” (Thomas Blees, 90 Minuten Klassenkampf: Fischer Taschenbuch, 1999. pg. 51). And when talk turned to the results of the GDR’s national team, it would rarely have brightened the mood for while football was clearly the “people’s choice” in terms of popularity and participation, the GDR team’s performance was rarely to the level that would’ve endeared it to the Party bigwigs who expected East German athletes to climb the podium so that the “Workers and Peasants’ State” could bask in the reflected glow.

Olympic gold at the 1976 Montreal Games marked the high point of GDR football achievement, but that was on paper only; for most fans of the sport, the zenith of East German footy came forty years ago today, June 22, 1974, when the national team defeated the host West Germans in a group stage match at the Volksparkstadion in Hamburg during the 1974 World Cup.