In 1987 Amiga released a self-titled album by English singer-songwriter Billy Bragg, the contents of which were made up of the artist’s highly-acclaimed second record Talking With the Taxman About Poetry. This record is striking for the way in which it Bragg manages to wed the political to the personal without coming off as heavy handed. 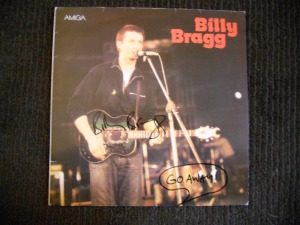 Billy Bragg – S/T (Amiga release, 1987) – front cover – My copy is autographed and Billy added a “voice from the crowd” yelling “Go Away!”, a reference to his having been kicked out the GDR in 1989 for criticizing the Berlin Wall.