I’ve amassed a small number of programs from matches involving East German teams over the last number of years. As a fan of the “beautiful game” I naturally gravitated towards this ephemera because of its often attractive design, but a closer examination of these mementos reveals them to be a very good reflection of the state socialist society that produced them.

END_OF_DOCUMENT_TOKEN_TO_BE_REPLACED

One of the central focuses of my collection through the years has been my attempt to recreate the “All-Time GDR Oberliga Table” in beer glasses. The “eternal table” is a way European soccer fans gauge a club’s overall success by amalgamating league results over time to create standings which reflect all match results – ever. Thankfully, such a table exists for GDR football and it brings together some 44 teams which competed in East German soccer’s top flight during its existence from 1949 to 1991.

I have tried to acquire a beer glass for each team in the table and my collection now includes 24 of the 44 teams found in the “All-Time” table. While I’ll be adding a couple of new glasses in the near future, I fear that I may have reached the end of my acquisitions, howver, as many of the teams represented in the table were there only briefly or played in the 1950s, factors which worked against the creation of commemorative glassware.

In the coming months (years?), I hope to turn the spotlight on some of the clubs with particularly interesting histories, but for now post my collection for your enjoyment below. (I’ve included additional information on the teams in the captions which can be accessed by clicking on the photo.)

Many thanks to Ralph Newson for taking the photos seen here!

Berliner FC Dynamo (2nd place, 35 seasons, 1092 points) was the much hated club of the East German secret police and GDR champions for ten straight years between 1979 and 1988.

1, FC Dynamo Dresden (3rd place, 31 seasons, 1077 points) were the main rivals of BFC Dynamo in the late 70s and 80s. This glass recalls the distinctive lighting masts of the team’s home ground the Rudolf-Harbig Stadion (since removed).

1. FC Lokomotive Leipzig (4th place, 36 seasons, 1039 points) were one of the first addresses of GDR football. Their victory over Girondins Bordeaux in the 1987 Cup Winners’ Cup in Leipzig’s massive Zentralstadion has gone into history as one of the great matches involving an East German team.

FC Wismut Aue (5th place, 38 seasons, 1018 points) were a power in the 1950s and an “evergreen” in the Oberliga enjoying the most seasons in the top flight of any GDR club.

FC Vorwärts Frankfurt/Oder (6th place, 35 seasons, 1012 points) were a club affiliated with the National People’s Army and located in one of its bastions near the Polish border.

FC Vorwärts Berlin were one of the GDR’s top teams from the mid-1950’s through to their relocation to Frankfurt/Oder in 1971.

1 FC Magdeburg (8th place, 30 years, 920 points) was the only East German team to win any European hardware taking the Cup Winners’ Cup from AC Milan in 1974.

BSG Sachensring Zwickau (9th place, 35 seasons, 888 points) were sponsored by the factory producing the GDR’s (in)famous Trabant car and even featured the plant’s logo in their team crest.

FC Hansa Rostock (11th place, 31 seasons, 808 points) were only of GDR football’s weak sisters, perhaps cursed as a result of their founding when Empor Lauter, a successful team from Saxony, was forced to relocate to the Baltic port in 1954 to address this city’s lack of a team in the top flight.

FC Karl-Marx-Stadt (12th, 31 seasons, 769 points) most notable as the club where German skipper Michael Ballack would learn his footballing ABCs. The team now operates as Chemnitzer FC, reflecting the city’s jettisoning of its “honorific” name as soon as it was able in 1990.

BSG Chemie Leipzig (13th place, 27 seasons, 733 points) was founded in 1964 as part of the reorganization of GDR football. Made up of those players deemed not good enough for Leipzig’s “main” team, Lokomotiv, the team promptly won the East German championship and earned the support of many “regular” Leipzigers because of the apparent discrimination it had experienced at the hands of authorities.

1. FC Union Berlin (14th place, 19 seasons, 423 points) were the “underdogs” of East Berlin and, at least according to the Stasi, a meeting place for “asocials” in “The Capital of the German Democratic Republic”. And East German Cup Winners in 1968.

BSG Lokomotive Stendal (16th place, 14 seasons, 356 points) were having none of these pseudo-champagne flutes. Here their nice “down to earth” pint glass! 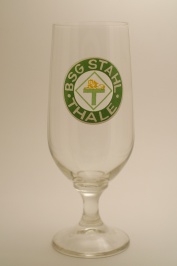 FC Energie Cottbus (24th, 7 seasons, 117 points) were one of the few GDR teams to make the leap from the GDR league into professional football in unified Germany.

BSG Stahl Eisenhüttenstadt (29th place, 3 seasons, 61 points), originally FC Stahl Stalinstadt, became the only team in Oberliga history to be penalized for “damaging the principles of socialist society” when the club was relegated from the top tier for being a bit too obvious about the fact that its players were not the amateurs they were supposed to be. 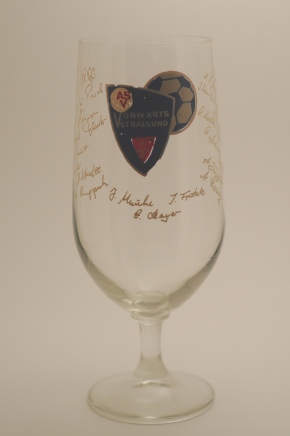 ASV Vorwärts Stralsund (36th place, 2 seasons, 33 points) only sniffed first division air in 1971 and 1974, but were a perennial power in the GDR League, the country’s second division.

BSG Motor Suhl (44th, and last place, 1 season, 5 points) managed a single season (1984/85) in the GDR’s top league. Given the result, perhaps this was best for all concerned.