Had Täve Schur not existed, the GDR would have had to have invented him. In fact, one might argue that it did.

Gustav-Adolf Schur, or Täve as he is known to all East Germans of a certain age, was a road racing cyclist whose fame grew throughout the course of the 1950s as he moved from one sporting success to the next.

His evolution into becoming an East German sporting icon was not, however, simply the result of his remarkable career, but also a reflection of his having been embraced by the nascent Workers and Peasants’ State. Indeed, Schur emerged onto the scene at a time when the GDR leadership was searching for ways to raise the country reputation both at home and abroad. In Schur, the regime found a homegrown hero who was demonstrating to the world – and his fellow East Germans – the heights which they – and, implicitly, their political / social system – could reach.

For those interested in the aural medium of podcasting, I have once again had the pleasure of contributing to the excellent Radio GDR podcast, this time for an episode entitled “Musik in der DDR: Rock and Pop Music of East Germany”.

In this episode, I explore a variety of topics related to popular music in the GDR with Dr. Ed Larkey, a professor of German and Intercultural Communication at the University of Maryland, Baltimore County. Dr. Larkey was a great interviewee as not only has his academic research included a variety of aspects of GDR popular culture and media, but these interests grew out of his experiences studying and working in the country during the 1980s.

In our previous post on the Chemical Works at Leuna and Buna, the focus was very much on the political and economic history of those sites. But what was working life like for the nearly 50,000 East German workers who were employed at these works (28,000 at Leuna, 18,000 at Buna)? In this post, I’ll speak to someone who did just that in the hopes of getting a glimpse into the life of a blue collar worker in the “Workers and Peasants State”.

END_OF_DOCUMENT_TOKEN_TO_BE_REPLACED

I was recently able to sit down with Dr. Luise von Flotow, a professor in the University of Ottawa’s School of Translation and Interpretation, to discuss They Divided The Sky her excellent English language translation of GDR author Christa Wolf’s 1963 novel Der geteilte Himmel. Our chat is now online through Radio GDR, the English-language podcast dedicated to all things East German and you can find it here: https://radiogdr.com/they-divided-the-sky-christa-wolf-episode-12/

Wolf’s novel is great place for those looking to get a sense of everyday life in the GDR during the “Construction Years” of the late 1950s and early 1960s and Dr. von Flotow was able to share some interesting insight into the work, its translation history and why it remains a vital piece of GDR culture.

Join the GDR Objectified on a field trip to Frankfurt / Oder, a city one-hour east of Berlin on the German-Polish border. The East German era has left considerable traces in the city and we’ll seek some of them out here.

The GDR Objectified visits Marzahn, a socialist-era housing project on the eastern edge of Berlin, to seek out GDR-era public art scattered throughout the estate. 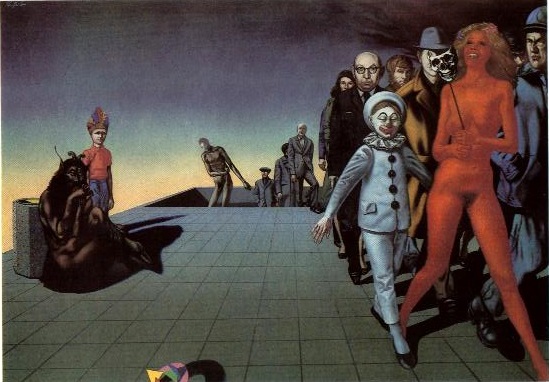 I am by no means an expert in fine art, however, I have found that East German art has provided me with some very useful perspectives on GDR life and society. One of my favourite artists is Uwe Pfeifer, a painter from Halle, whose work captures an ambivalence towards the state socialist system in a palpable way. Technically speaking, the impact of his schooling under two masters of German art, Wolfgang Mattheuer and Werner Tübke, is clear, however, Pfeifer clearly treads his own path.

Above a work entitled Auf dem Wege (On The Way) which features a number of references to German cultural life, but, unable to decipher them all myself, I wrote the artist in search of assistance. To my delight he responded to my mail with the following note:

“This picture was commissioned by the Kulturbund der DDR (GDR Cultural Association) in 1987 to mark the organization’s 40th anniversary.

Sitting in front of the GDR-era garbage can is Pan, a god from Greek mythology and next to him is a child (son of the artist) playing “Indians”.

Emerging from the depths first is the symbolic figure of a German Man of Sorrows (Deutscher Schmerzensmann) followed by Bert Brecht, an unnamed figure and then Johannes R. Becher (poet and GDR Minister of Culture from 1954-58, ed.).

From left, the figures at ground level are: some have seen author Christa Wolf in this first person (U. Pfeifer: “I can accept this interpretation.”), then comes Hans Eisler, next to him Caspar David Friedrich (German Romantic painter, ed.) in front of whom is a child in a Pierrot costume (perhaps symbolic of a fool, ed.) in behind whom is an observer in coat and hat meant to represent the Stasi, the red female nude is a figure symbolizing life and next to her is a symbolic worker. That covers the people.

The wind wheel at the bottom can be understood to represent, among other things, stagnation and movement . . . “

Auf dem Wege was not the first time Pfeifer used this motif of a group in motion in his work. Another piece from the same year, Die Gefährten (The Companions), which was commissioned for the Pedagogical College in the artist’s hometown of Halle, also features a group of prominent figures from different eras striding a path together. While both works take socialist society and culture as their starting points, each seems to incorporate reference to the shadows which hung over everyday life in the GDR.

An earlier work of Pfeifer’s, Feierabend (After Work) from 1977 (seen below), shares the same central image with the two aforementioned paintings, but was the target of much more criticism. Set in an underground walkway (likely inspired by a similar one found under Halle’s Ernst Thälmann Square which has since been removed), this painting features a largely faceless crowd shuffling their way home. The only figure to face the viewer has turned back to glance over his shoulder, a vaguely threatening look on his face, his hand balled into a fist. In the foreground, a garbage can holds a newspaper. This last detail provoked the charge from a high level cultural apparatchik that Pfeifer was criticizing East German media; I’ve also seen interpretations that emphasize the anonymity of the crowd and the monotony of the setting as critiques of the GDR’s “normed” culture, but I find that the artist’s choice of colours and the distinctive dress which he has given these passersby work against such a reading. Again, it’s this ambivalence that I find so engaging. Hopefully you will too. 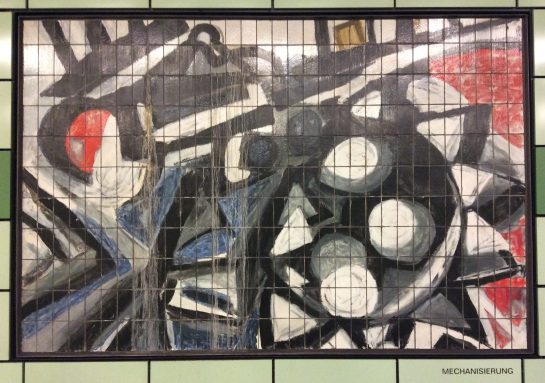 Many visitors travelling by subway to Berlin’s Stasi Museum in the Normanenstrasse may not know it, but their immersion into the ambiance of late-stage “real existing socialism” actually begins when they exit their train at the Magdalenenstrasse station. For it is here, that passengers are met by a series of 20 large scale paintings done in a neo-expressionist style: angular, often grim and only occasionally punctuated by a blast of bright colour. They aren’t “easy” images these 3 metre by 4 metre paintings on Meissen porcelain tile. They challenge and unsettle.

Those with a keen eye will find a tile at one end of the platform which identifies the works as being from the year 1986 and gives their title as “History in Twenty Images”. The artists are named (Harmut Hornung and Wolfgang Frankenstein) as is the commissioning institution (Berlin Magistrate’s Office).

While marginally enlightened by the information plaque, one is left asking oneself: how, pray tell, did art of this type – so distant from the bright futures, heroic poses and “positive” themes typically favoured by GDR authorities – find its way into the public realm anywhere in the East German capital, much less onto the walls of the subway station directly adjacent to the Stasi headquarters?!

Let’s take a couple of minutes to answer this question . . .

END_OF_DOCUMENT_TOKEN_TO_BE_REPLACED 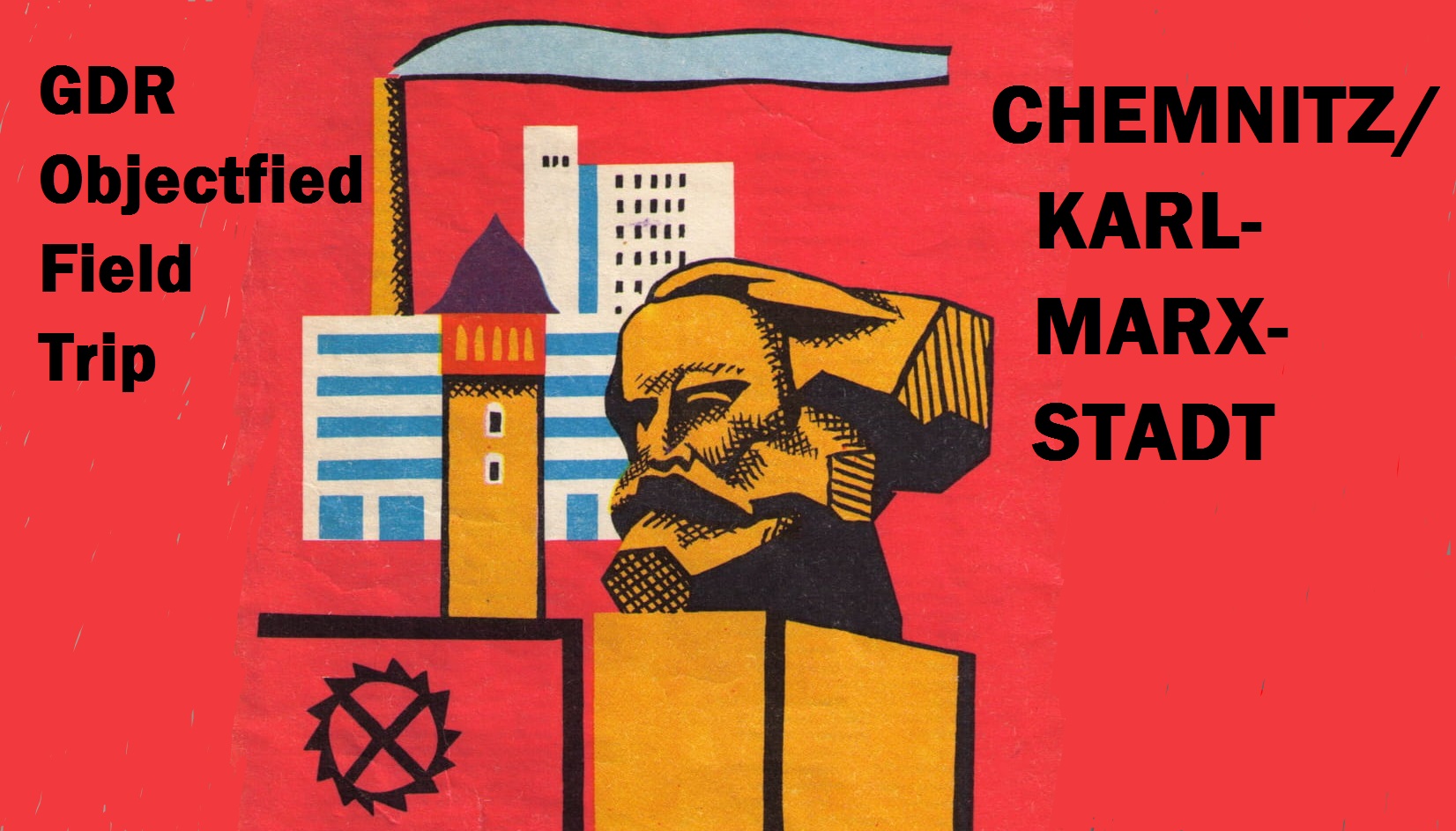 Happy New Year! I’ve managed to get a new GDR Objectified Field Trip together and this time it’s to Chemnitz / Karl-Marx-Stadt. Check it out at: https://www.youtube.com/watch?v=3xj2Dwjz5go

My copy of the East German pressing of Depeche Mode’s Greatest Hits album which state’s Amiga label in 1987 (photo: author).

In 1988, it was clear to both East Germany’s ruling Socialist Unity Party (SED) and its official youth organization, the Free German Youth (FDJ), that the country’s youth were being lost to the “real existing socialist project”. Searching for a means to address this, the FDJ reached for a solution which would have been unthinkable only a few years earlier and started booking major western pop stars for concerts in East Berlin in the hope that the organization might burnish its image by basking in some reflected glory. Many of the bookings made as part of this project including Bruce Springsteen, Bryan Adams and Joe Cocker made sense on one level as the acts’ blue-collar, working class images dovetailed somewhat with the GDR’s official ideology.

But Depeche Mode? How did the FDJ justify having the British synth-pop stars headline the organization’s birthday concert at East Berlin’s Werner Seelenbinder Hall on March 7, 1988? END_OF_DOCUMENT_TOKEN_TO_BE_REPLACED