My collection includes this replica of the jersey worn by the GDR team when they defeated the BRD 1-0 at the 1974 World Cup (photo: author).

The GDR was a footballing nation and in this respect at least, its leaders were in tune with their populace. The members of the ruling Party’s Politbüro, the seat of power in East Germany, apparently spent much time “discussing football results” (Thomas Blees, 90 Minuten Klassenkampf: Fischer Taschenbuch, 1999. pg. 51). And when talk turned to the results of the GDR’s national team, it would rarely have brightened the mood for while football was clearly the “people’s choice” in terms of popularity and participation, the GDR team’s performance was rarely to the level that would’ve endeared it to the Party bigwigs who expected East German athletes to climb the podium so that the “Workers and Peasants’ State” could bask in the reflected glow.

Olympic gold at the 1976 Montreal Games marked the high point of GDR football achievement, but that was on paper only; for most fans of the sport, the zenith of East German footy came forty years ago today, June 22, 1974, when the national team defeated the host West Germans in a group stage match at the Volksparkstadion in Hamburg during the 1974 World Cup.

Before the Tournament: Group of, if not Death, than Extreme Discomfort

Confident of their athletes’ abilities, GDR sporting authorities often liked to use encounters with western nations as a way of demonstrating the superiority of the East’s political and social system. In the case of the 1974 World Cup, however, East German sporting leaders were primarily concerned with avoiding having to face a strong West German playing in front of its home fans. Things didn’t quite work according out to plan.

Rather unorthodox commemorative glass with signatures of GDR team and World Cup logo, but no mention of GDR or its Football Association (photo: R. Newson). 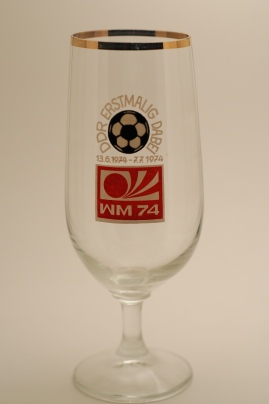 East Germany was drawn into a group with Australia, Chile and the host West Germans. Now as if getting the West Germans wasn’t bad enough, the inclusion of Chile posed additional problems for the GDR. East Germany had taken a leading role in offering refuge to Chilean leftists who had found themselves in danger when the country’s military led a coup to overthrow a democratically-elected socialist government, and some Party leaders did not want their athletes to legitimize the new regime by playing against it.

Upon returning to East Berlin, the President of the GDR Football Federation was called onto the carpet to explain how things could have gone so wrong. Manfred Ewald, the Director of the German Gymanstics and Sport Association (DTSB) and the grand poobah of East German sport demanded to know why nothing had been done to prevent this outcome? The hapless Federation functionary explained that there had been no way to influence things as it had been a random draw. Ewald then tried to secure assurances that the GDR would defeat the West and when these weren’t forthcoming, reportedly inquired what sort of penalty East Germany would have to pay for withdrawing from the tournament. When quoted a substantial hard currency amount, he blanched and with that, the matter was settled: the GDR would play (Thomas Blees, 90 Minuten Klassenkampf: Fischer Taschenbuch, 1999. pgs. 19-20).

Externally, GDR authorities tried to play down the match, not wanting to raise the public’s expectations. Internally, however, it was a different story. Blees’ book uncovers a text drafted by the team’s training staff and submitted to the East German federation in March 1974. Here the coaches frame the team’s World Cup participation in overtly political terms: “A good showing by the team would be a worthy contribution by the Federation to mark the 25th anniversary of the existence of our Republic.” (pg. 51, Blees) The players too received considerable ideological preparation for the match. As the Vice-President of the GDR’s Olympic Committee is quoted as saying: “At the time, in the middle of the Cold War, sport was part of the class struggle. There were two competing systems, the socialist and the capitalist. We belonged to one, the West Germans to the other. We were opponents – and both sides saw it that way.” (pg. 64)

This match was the first official meeting ever between the two German teams in the sport of football and interest in it was naturally very high. However, both squards entered it knowing that they had already qualified for the next round, so while neither side wanted to come out on the short end of such a symbolic encounter, the only thing at stake was first place in the group standings.

Perhaps it’s the benefit of hindsight and knowing how things would play out, but watching the match today, I am struck by its relative lack of intensity. The GDR is most concerned with keeping the West German attack at bay and is very well organized at the back. Still, the West do manage to generate some scoring chances, they even hit a post late in the first half, but the GDR stays in it. Things cool off a bit in the second half but in the 77th minute, as a goalless draw was beginning to seem the likeliest outcome, East German striker Jürgen Sparwasser outlegs two West German defenders to a nice through ball from the midfield and places a lovely shot past ‘keeper Sepp Maier a goal that would hold up to give the GDR a completely unexpected 1-0 win.

The result was front page news in East and West and made Sparwasser instantly famous. He later quipped, “If one day my gravestone reads ‘Hamburg ‘74’, everybody will still know who is lying there.” In retrospect, it may have been a pyrrhic victory for the East German team because as group winners they ended up exiting the tournament after drawing what was arguably a more difficult round two group (with the Netherlands, Brazil and Argentina) than the West Germans did.

The West Germans went on to win the tournament and the team captain Franz Beckenbauer has even gone on the record stating that the loss to the GDR was a pivotal moment for his team: “The Sparwasser goal woke us up. Otherwise we never would’ve become world champions” (www.fifa.com/classicfootball/matches/world-cup/match=2062/index.html).

A couple years after the World Cup, Sparwasser fell out of favour with East German authorities when he refused to take over the reigns of his former club team 1. FC Magdeburg wary of the political interference that came with such work. Shunted aside, he led a rather unhappy existence outside of football until defecting to West Germany in 1988 while playing there in an old-timers match. Sparwasser’s recollection is that scoring the goal did him more harm than good in the East:

“It was strange, When I would play in stadiums around the GDR or be out and about, I’d hear rumours of what I’d supposedly received for scoring that goal. That I’d gotten a house, a car, a pile of cash. And then of course there was the fact that a lot of East Germans would stand up and sing the West German anthem when their team was playing. No surprise that those folks weren’t exactly happy with that goal.” (pg. 115. Blees)

The GDR National Team: Close But No Cigar

Program for GDR’s World Cup qualifier against Austria in October 1977, a match they would tie 1-1 (photo: author) 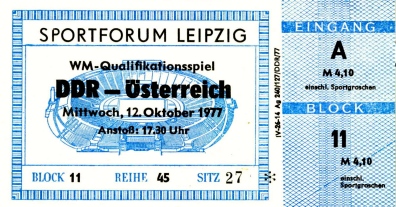 Joachim Streich, the GDR’s most capped international and all-time leading scorer, graces the cover of match program for World Cup qualifier between GDR and Poland in October 1981 (photo: author)

The 1974 World Cup was the only one for which the GDR managed to qualify. Participation in European Championships also remained elusive for team which was typically in with a shout, but would fail at or near the final hurdle. My collection includes a few mementoes of the national team’s vain efforts to secure a spot in the 1978 and 1982 World Cups in the forms of two match programs and one lovely ticket (thanks Julia and Sebastian!).

Below “highlights” of the GDR team bottling qualification to the ’78 World Cup by failing to beat Austria in a 1977 qualification match played in front of 95,000 spectators (!) at Leipzig’s Central Stadium