About fifteen years ago or so, I was back in Winnipeg visiting family during the summer. One afternoon I was driving around with my aunt when we passed a car lot on a service road in the city’s north end. As we zipped by, I caught a glimpse of a vehicle in a shade of baby blue which I’d only ever seen used to paint the East German Trabant. I called out for my aunt to stop and we turned around so that I could make some inquiries. First, I made my way over to the car and confirmed that it was indeed a Trabi with its GDR license plate still attached. I went into the office and the young woman there informed me that the car belonged to the lot’s owner who was originally from Germany and who’d had it shipped over after a visit home in the summer of 1990. She told me that the car was not for sale (a man can dream, can’t he?) and after chatting with her for a bit, I left things there. Until I started this blog , , ,

The Trabant of my dreams! (photo: author)

When drafting my first post on the Trabant earlier this year, I recalled my Winnipeg encounter and realized that our planned visit there this summer might afford me the chance to track down that car once again. I put my aunt on the case and within days a friend of hers had identified the lot where we’d seen the Trabi as EK Import Auto Service and its owner as one Frank Koesters. Armed with this information, it didn’t take me long to track Frank down and he readily agreed to speak with me about the car and why he’d brought it to Winnipeg. I started our conversation by telling him about my encounter with the car and how its unmistakeable pale blue had turned my head. Frank laughed but corrected me: his car was grey, not blue! (Another wonderful example of the way this blog works to illustrate the vagaries of memory and the remembered.)

Frank Koesters emigrated to Winnipeg in 1972 from Münsterland, a region in the north-western part of the former-West Germany not too far from the Dutch border. Like many German families, the Koesters were directly affected by Germany’s post-war division. Most of the family found itself on the western side of the inner-German border, but one aunt remained behind in Thueringia, a region that became part of the GDR. Having left the Federal Republic for Canada as a young man, however, Frank had no contact with or real impression of the GDR until after the fall of the Berlin Wall. As chance would have it though, his high school reunion took place in the summer of 1990 and he used the opportunity to travel back for this and to look around the “new Germany”.

A First Foray into the East: Gera and Dresden

The ruins of Dresden’s Frauenkirche as it stood in the summer of 1990 (photo: Jörg Schöner)

Frank has some very vivid impressions of that trip including his first forays into what was still East Germany. A visit to the aunt in a town on the outskirts of Gera found her residing in a converted barn. “It was pretty bleak,” Frank remembers, “and I think it was embarrassing for her to have us see how she was living.” A side trip to Dresden brought him and his family face-to-face with the destruction wrought on the city by World War II. “A lot of the city had been left as it was after the bombing (ed. note: Almost all of Dresden was completely destroyed in a bombing raid by Allied forces in February 1945.) The Zwinger was in decent shape (ed. note; a Dresden landmark, this palace had belonged to the Saxon royal family and the renovation of this Rococo building was one of the few of its kind completed by the GDR in the post-war period), but where the Frauenkirche had stood was just a pile of rubble with some little birch trees growing out of it.” (ed, note: this church is another Dresden icon and was destroyed in the bombing raid that devastated the city in February of 1945. In the GDR years, it was left as a ruin to serve as a war memorial, but it was rebuilt in the post-reunification era in a feat of considerable engineering brilliance.)

Trabis Here, There and Everywhere

Frank told me that his introduction to the Trabant didn’t come with the images of the kilometer-long lines of the vehicles at the inner-German border when the Wall fell, but that he had been familiar with the car from his youth in Germany: “Originally the East Germans wanted to sell the Trabant in West Germany, to compete with the VW Beetle. It was the cheapest car around. You could get one for 3,600 Deutschmark which was a really good price. My first boss sold them and they were a nightmare to work on, very primitive. There was one guy who used to bring his in for us to fix and I remember he had an accident one night. He drove into the ditch and the thing just flew into pieces!”

Not surprisingly, when Frank travelled to Germany in the summer of 1990, he encountered the ubiquitous Trabi everywhere. The most memorable meeting was with a convoy of Trabants at a rest stop on a West German autobahn. Intrigued by the vehicles, Frank went over for a look and recalls how the Trabi drivers wedged portable transistor radios into a narrow ledge of the dashboard on the passenger side to compensate for the lack of a built in system. One driver popped his trunk to reveal all the spare parts a Trabi driver had to have with him: “You have to understand that these were really ‘self-service engines’ and that a Trabi driver had to be ready for anything. When this fellow opened up his trunk to show me how it was full of the spare parts he might need, it was incredible!”

It didn’t take long for Frank to decide that he wanted one of these unusual vehicles and soon a friend who he’d worked with before emigrating and who had left the East was on the case. Through contacts, this colleague found a P601 and soon Frank was the proud owner of a Trabi. He had the car shipped to Canada from the German port of Bremerhaven and from there it made its way to Winnipeg by train. Originally, Frank had planned to put it on the roof of his dealership, but he told me, “Once it was here I realized that this was a really bad idea as nobody knew what it was!” So, the car found a spot on the lot where it still managed to turn heads: “East Europeans would see it and come in. ‘You have Trabant!?’ They couldn’t believe it. But no one ever wanted to buy it!”

After a number of years on the lot, one of Frank’s neighbours, pestered him into selling it. This fellow managed to get the vehicle licensed as an “Old Timer”, but the car needed work. A new engine was sent over from the “new German states” by Dutch relatives and this brought the P601 back into working order. Shortly thereafter ownership passed to Eric Werkman, the owner’s younger brother.

On my recent trip back to Winnipeg, I was able to meet both Frank Koesters and Eric Werkman for a chat and, more importantly, a test drive! When I asked Eric why he was interested in owning a Trabant, he told me that it was quite simple: “Because no one else has one.” With its “Old Timer” status, Eric can bring the car out for shows or servicing and it certainly turns heads when he does: “People are just standing there asking, ‘What is that?!’ I’ve heard that there is one out in B.C. and another in Ontario, but mine is the only one around here. That’s for sure.”

The Challenges of Trabant Ownership 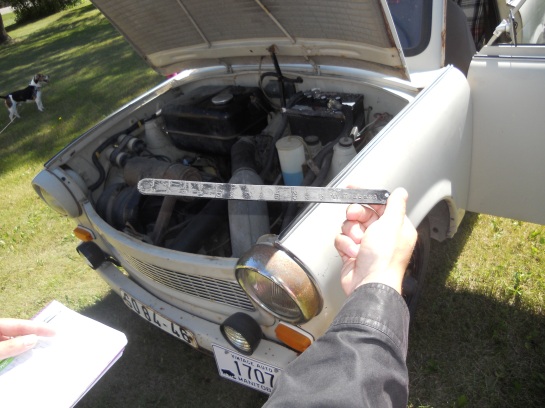 The fuel gauge for this model of Trabi, as was the case for all of them pre-1986, was found – conveniently – under the hood. At least it had a nice long handle to spare your cuffs! (photo: author).

Operating such a unique vehicle, however, does present some challenges. First, the Trabi’s two-stroke engine needs an oil-enriched gasoline in order to run properly. As this is not available at the pump in Canada, Eric mixes his own. The other issue which arises from time to time also has to do with gasoline. Since Trabis did not come with a dashboard mounted gas gauge until the late 1980s (!), assessing how great one’s radius of action requires constant calculating. If you want to get a clear read on how full your tank is, however, you have to pop the hood and check the dip stick. On the plus side, the Trabant was clearly designed to make servicing the car as easy as possible and, as Frank and Eric showed me, it is remarkable how simply its engine can be slipped out for easy access.

The practicality of these cars really can’t be denied. They may have been extraordinary polluters, loud and insanely expensive (at the time anyways), but they tended to be reliable and easy to keep running. It will come as no surprise to anyone who reads this blog that the idea of buying a Trabi of my own has been on my mind for a while.  Sadly it appears that Eric is not yet ready to part ways with his P601!

The Trabant’s Contribution to the World

What may come as a bit of a surprise is the fact that apparently someone else in Canada thinks that there are others like me out there. Indeed, while researching this piece, I came across the website Trabant Canada, an Ontario-based outfit which offers Trabis “ready for certification” from a starting price of $5,900. That seems like a lot of money for a car you can find in eastern Germany for around $500, but it seems the operators of this business were expecting those sorts of objections, because their “Information” page provides a justification of the costs involved:

You can try to find and buy a Trabant in Europe yourself, but you will only find Trabant’s in poor and run down condition. which is generally the way most Trabant’s are these days. Then to get it shipped to Canada is another story.

If someone was to try to locate one in excellent condition in Europe, it would cost at least 1000$ to fly to Europe, plus hotel and travel expenses, along with weeks or months of searching. then the shipping cost paper work and not to mention Customs Canada.

I may also find you a Trabant for around 1000$ in Europe, but then you will have to get it repaired someplace. You will also be responsible to cover finders and administration fees as well as all related and handling costs and other expenses to bring it to Canada. Unless you want to do this all yourself. good luck. We also will not guarantee the quality or the car.

We stand behind all our Trabant’s and ensure that it is a quality used car. Our  contacts in Europe can locate any type of Trabant a customer may be looking for.”