Palace of the Republic
3 Comments

One of the interesting things about East German consumer culture is that it tended to produce a GDR pendant to most popular West German or Western items. For instance, a hamburger, could not, for obvious reasons, be referred to as such, so the East German version was christened Grilleta. The hot dog, or if one wishes to be provocative, frankfurter, was known as a Kettwurst (‘chain sausage’ in reference to it being produced in links). Jeans became ‘rivet pants’ (Niethosen).

In the world of children’s toys, the GDR responded to the popularlty of Lego™ building blocks by commissioning the People’s Own Plastics Manufacturing plant in Gotha to develop a similar product in the late 1960s. The East German version of this toy was given the name Formo Building Blocks and went on to be produced through to the end of the GDR in the 1990.

Interestingly, Formo produced packages of building blocks in various shapes and sizes and did not typically sell blocks as part of a set. The one exception to this practice was its set of the Palace of the Republic (PdR) which was available for purchase only at the Palace itself as a souvenir. 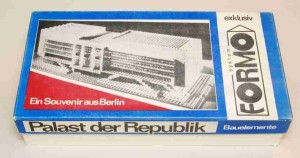 Sadly, my PdR set (or as I like to call it in German: ‘Plaste der Republik‘) is not an original, but was produced by a Thuringian company which secured the rights to the Formo designs from the Treuhand (‘Trust’) which oversaw the transfer of all GDR state property into private hands. That said, having put the Palace together, it heartens me that the new owners have remained true to Formo’s roots by producing a product which maintains some of the hallmarks of GDR manufactured goods. For example, ‘unease of use’ and subpar materials. 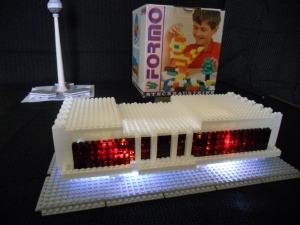 Palace of the Republic, Berlin, Capital of the German Democratic Republic – By Night

Please do not understand these as complaints, however, for as I struggled to ‘click’ some of the pieces into place (resorting to a small hammer on several occasions) and despaired as certain bricks asserted their autonomy by slowly liberating themselves from one another (thereby compromising the aesthetics of the model’s façade!), I was able to imagine myself kneeling on the bedroom rug of my family’s East Berlin Plattenbau (prefabricated apartment), working away to the muffled sounds of that evening’s episode of “Tatort” (‘Scene of the Crime’) as it passed from our neighbours’ living room through the shared wall, testimony of the Gumperts’ ‘inner exile’ by watching West TV . . .

Design
There are a couple of design elements in my set that I feel are worth drawing attention to.

First, the set does not include a piece with the East German state emblem on it. The actual palace had a huge steel version of this hanging above the main entrance. Indeed, this was the only decoration on the otherwise sleek façade and, as such, drew the observers eye. The original sets, naturally, included this piece (see above) and I’ll let you ponder why the new ones don’t.

Second, the brown blocks which mimic the mirrored-glass used extensively in the original Palace are opaque and allow some light to escape.  This is to facilitate the third design element: the two openings left in the set’s foundation to allow the model enthusiast to insert two small lightbulbs so that the Palace can be lit from within. This is a nice touch as the Palace featured thousands of light fixtures and was known, at least by travel guide writers, as Erich’s Lamp Shop (a reference to GDR leader Erich Honecker). At the top of this post, you’ll find an image of my set, glowing as if a torchlit parade of the Free German Youth were about to gather on the square in front of it.